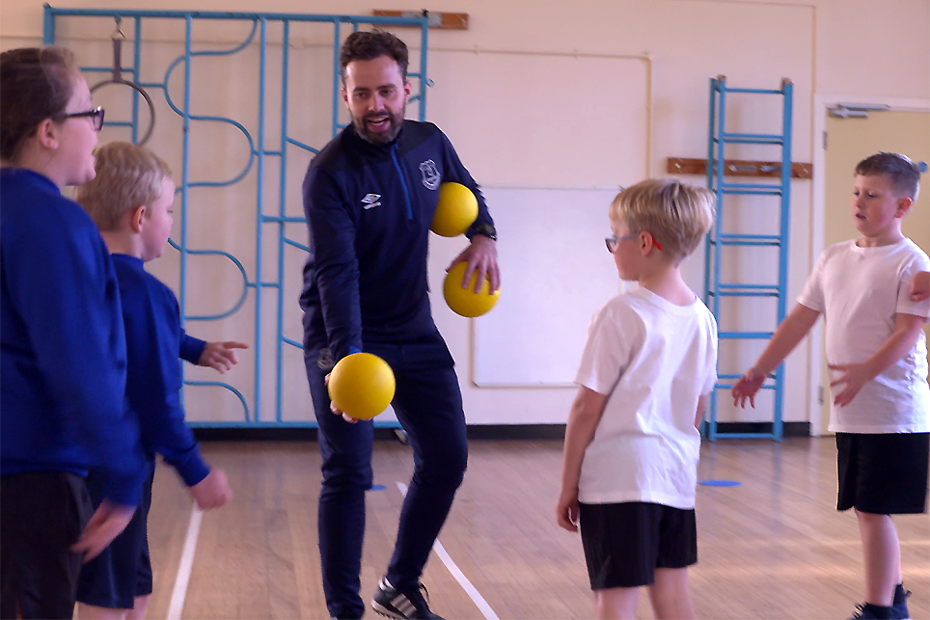 'EitC's Impact On Our School Has Been Absolutely Stunning' External Link
What is Premier League Primary Stars? External Link
Darragh and Liverpool inspiring others to play

A primary school in Liverpool has gone from being on the brink of closure and under special measures to being rated "outstanding" thanks to Everton and Premier League Primary Stars.

Knowsley Lane Primary had been one of the most deprived schools in the area of the city in terms of the percentage of pupils on free school meals.

It had issues with attainment and attendance and one day had to shut as it was turned into a crime scene after the fatal shooting of a teenager nearby.

"We are surrounded by gang culture," says school principal Linda Lord. "The children are vulnerable to being exploited by crime.

"We need to make sure we intervene early in their academic and social skills, establish how we expect children to conduct themselves in school, in lessons and in the wider community."

In 2016, the school started working with Everton in the Community (EitC) and the Premier League Primary Stars programme.

EitC coach Paddy Byrne began using PL Primary Stars resources in PE, PHSE and other lessons to inspire the children and encourage them to expand their horizons both inside and outside the classroom.

"If we can get the right information and experiences into them at a young age, that will hopefully plant the seed which sticks with them through to secondary school," says Byrne.

"And who knows where it could take them when they go into their adult lives."

Byrne also introduced breakfast clubs to make sure the children have something to eat in the morning as well as giving them an active start to the day.

"It is open to all but we have targeted children with poor attendance and punctuality and it has yielded massive improvements," Lord says. "The school has doubled the 35-40 children we previously had at breakfast club."

"The children love everything about Everton in the Community, so they will run to school"

With results and attendance on the rise, the transformation at Knowsley Lane has been significant and Lord attributes a lot of that improvement to Everton in the Community.

"I have seen the journey the school and community have been on and the incredible difference EitC has made," says Lord. "Their impact has been absolutely stunning… amazing.

"The children love school, which is brilliant. But they love everything about EitC, so they will run to school."

The school's improvement was recognised in an Ofsted report last month, which classed Knowsley Lane as "outstanding".

"This is one of the most powerful stories I've known," says EitC board member Sir John Jones, who spent 14 years as a headteacher. "It is an incredible odyssey and exceptional journey, undertaken in a relatively short time.

"EitC is helping the school's staff and the local community to teach these kids that you can go further than you thought, and reach higher than you dreamt, and run faster than you hoped – and become the person you need to be."