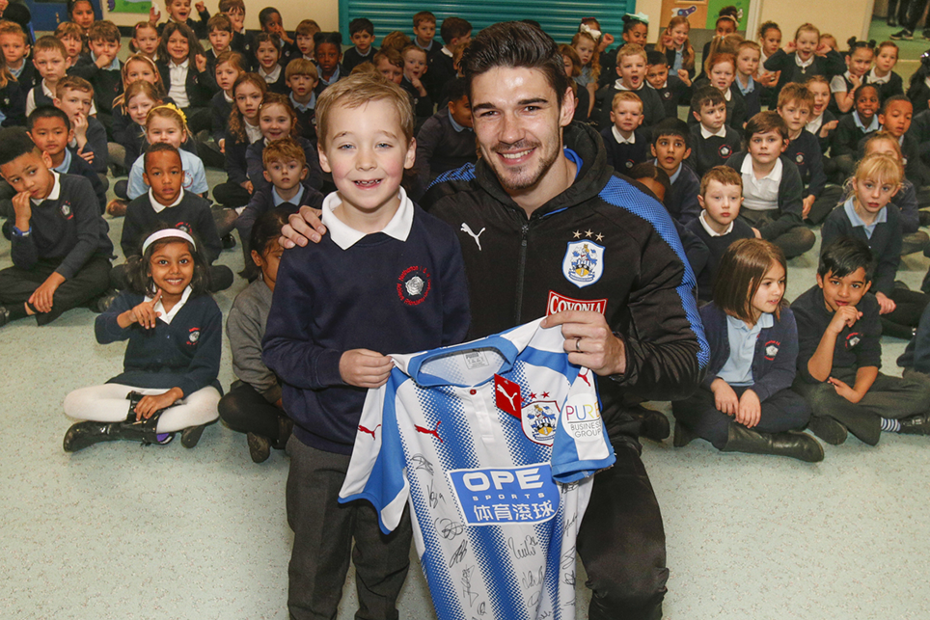 The Premier League Writing Stars competition last year encouraged more than 25,000 poems on resilience to be written by primary schoolchildren across England and Wales.

"William has always been an avid reader but not so much a writer," says his mum Sarah.

"Huddersfield Town means a lot to William. Every morning he reads the programmes he has collected as a season-ticket holder.

"But Premier League Writing Stars really inspired him and his whole class to write.

"The chance to write a poem that they may read was a huge incentive for William."

📽️ Listen to what William had to say on winning the #PLPrimaryStars Poetry Competition for the Yorkshire region and having his prize presented by #htafc defender Christopher Schindler. @PLCommunities

The inspiration was such that William's poem won a regional award.

"When the news broke that his entry had been successful his confidence in his writing ability soared and he produced much more, higher-quality writing," Sarah says. "He now believes he can do it and do it well.

"William loves to read but he now also loves to write. We are so happy that we got to experience this.

"As a teacher too, anything that can encourage children to write, especially boys, is a very admirable thing to do."

For his award, William received a framed copy of his poem as well as a signed Huddersfield Town shirt and a visit by Terriers defender Christopher Schindler to his school.

"Christopher Schindler arriving at William's school and reading his poem out was priceless. Memories that will last a lifetime were made.

"Huddersfield Town are such a special club. The role they play in our town is fabulous; the way that everyone responded to William was amazing."

Thousands more children will be inspired like William when the Premier League Writing Stars competition returns for 2018.

More details will be released soon.

Why can't I tackle?
Why can't I score?
I get so frustrated
I need to practise more and more.
I told my dad
He took me to the park.
We kept on playing
Until it was dark.
Now I can tackle
Now I can score
Now I love football
So much more.