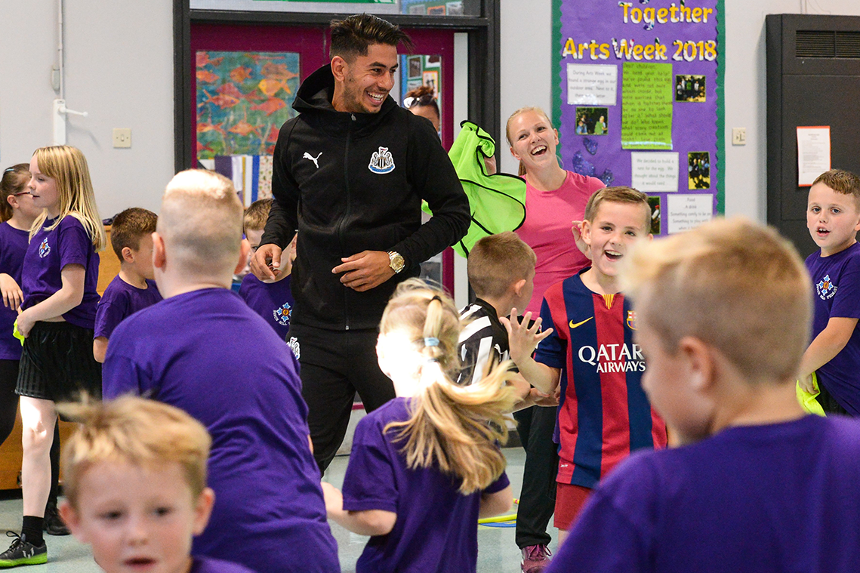 To mark the start of the new academic year, players have been delivering new equipment to schools as part of the Premier League Primary Stars Kit & Equipment Scheme.

The PL Kit and Equipment Scheme is available to primary school teachers who register to participate in the PL Primary Stars programme.

The equipment bag contains match balls, training bibs and pop-up goals as well as bean bags, numbered cones and A-Z floor markers to help the children learn as they play in active lessons across all subjects in the curriculum.

Kirkheaton Primary in Huddersfield not only got a new equipment bag but also a visit from Terriers first-team players Jonas Lossl and Erik Durm.

Burnley goalkeeper Tom Heaton joined in with the children at Whittlefield Primary to see how that equipment can be used in lessons.

Southampton defender Wesley Hoedt was impressed as the children combined physical and academic activity during a PE lesson at Swaythling Primary.

YOUR primary school could be eligible for free @NikeUK kit or a sport equipment pack. Apply 👉 https://t.co/HfpJbHpThR pic.twitter.com/hripphIgje

Newcastle United are one of 101 Premier League, Football League and National League clubs in England and Wales that deliver PL Primary Stars.

“I’ve loved this today, it’s probably been the most exciting day of my life!”

📰 @trippier2 today surprised pupils at a local school in Tottenham by delivering a PE lesson and donating some #PLPrimaryStars sports equipment. ⚽

Chelsea defender Cesar Azpilicueta spoke with children at Fulham Primary about what it takes to be a professional footballer.

"I think it's important the kids know that they are at that stage where they have to study in school and enjoy playing football," he said.

Schools across England and Wales have also started the new term with brand new Nike football kit pack, which contains 14 football shirts, one goalkeeper shirt, 15 pairs of shorts and 15 pairs of socks.

Wearing our new kit!!! Thank you #PLPrimarystars we are ready and raring to go!! 😁 pic.twitter.com/oT3rHd0E4Q

Little Sutton primary school are very excited to have received an amazing, brand new football kit ⚽️. Big thanks to @PLCommunities and @FootballFoundtn . Looking forward to wearing them in our future matches #PLPrimaryStars pic.twitter.com/j7lrndNwfU

#PLPrimaryStars Thank you from all the children at Woods Bank Academy for our football kit. We love it! pic.twitter.com/DM2pw54gou

Teachers can apply for the Kit and Equipment Scheme by visiting the PL Primary Stars website. The window is open until Friday, 26 October.