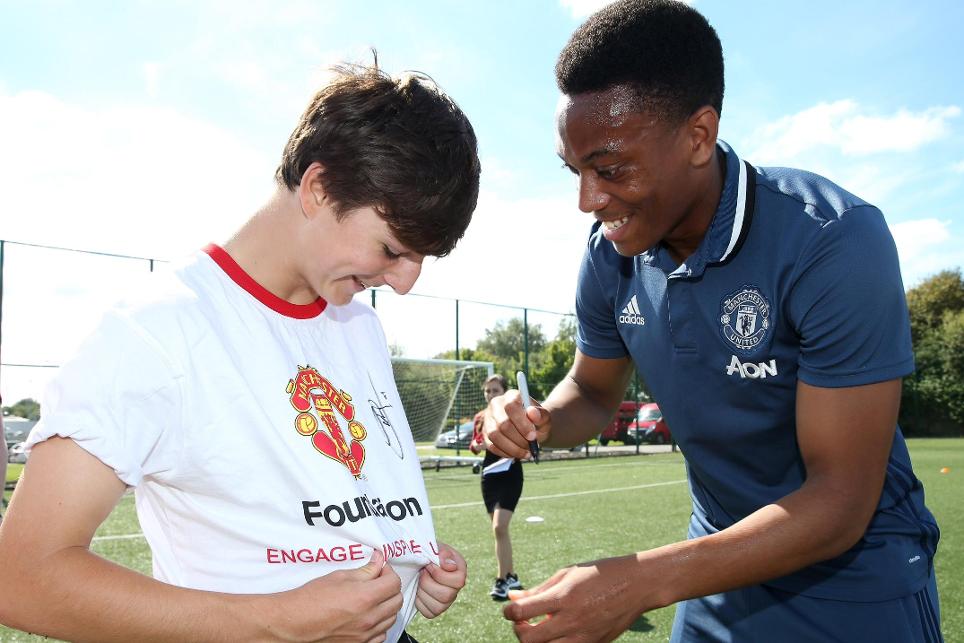 How to get involved in Ability Counts External Link

Teenage players with Manchester United Foundation's Ability Counts programme had the surprise of their lives when first-team players joined one of their skills sessions.

One participant was Chris, who plays for United's Deaf Team. The 16-year-old described how the programme helps him.

"I’ve been playing with United for six years now," he said. "I really enjoy training, it's quite challenging at times.

"I've just joined the adult 11-a-side deaf team which is harder but that's what I want to experience as it's my dream to be a professional footballer when I'm older. I play for a hearing team as well so I can do both - hearing and deaf teams - which is really good.

"I’ve enjoyed playing on the Academy pitch and meeting the famous footballers, they're quite a bit bigger than me! I was a bit nervous coming here but really excited; I didn't know we would meet the footballers but I thought they might be around the training ground.

"I had a kickabout with Martial which was really good, he’s very fast and skilful!”

Dylan, 14, added: "I can’t wait to go back to school and tell everyone about today - they will be so jealous!"

"You could hear the gasps as they met all these players they've watched on television for years," Ability Counts coach Danny Boylan said. "Now they've been able to pass and receive the ball with them and have a laugh and joke.

"Ability Counts helps players feel comfortable while having some fun. It offers a level playing field to play football and forget about the things that might hold them back whether it be physically or physiologically.

"For me it's the best thing in the world to see young people taking these opportunities that they wouldn't normally have and it's all thanks to the work of the Foundation."