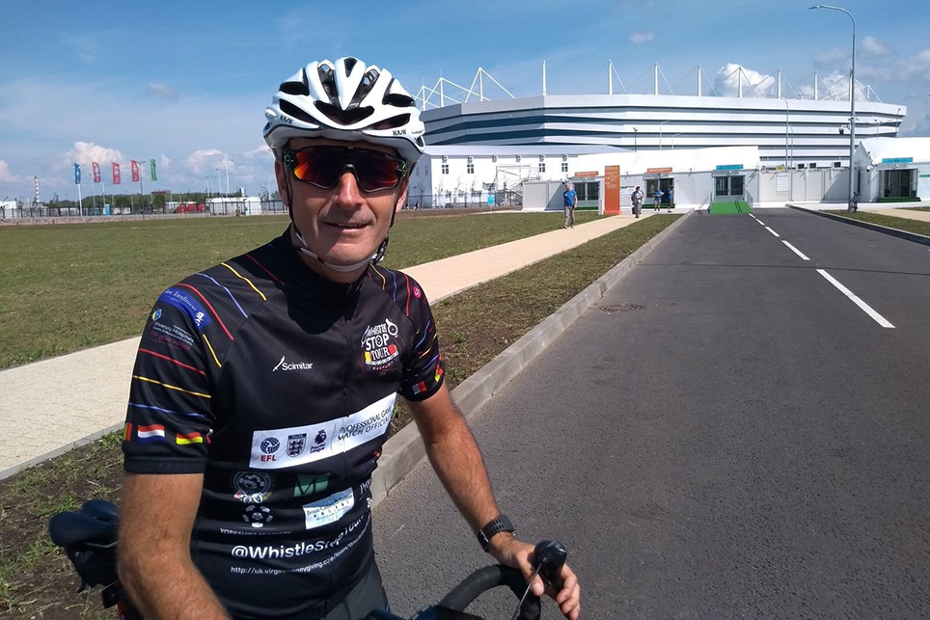 Rather than having a summer off, Premier League referee finishes three-week cycle from England for four good causes

Instead the Premier League referee has just finished a gruelling, three-week bike ride from England to Russia.

Atkinson’s Whistle Stop Tour has helped to raise almost £60,000 for charity and the Professional Game Match Officials Limited's (PGMOL) Select Group ref says it is even helping him to prepare for the 2018/19 season.

"If you told the lads within the Select Group you're doing 1,700 miles on a bike they would say you're crazy!" Atkinson tells premierleague.com.

"It will be a great base for pre-season and I'm hoping it will benefit me during this season."

"I'm lucky. I can get up, get on a bike, get past a bit of pain. Some people for the charities we're raising for, there are people who can't do that."

He crossed the finish line in Kaliningrad on Wednesday, the location of England's FIFA World Cup match with Belgium the next day.

He will fly straight back to England after the match, for a PGMOL conference as preparations for the new campaign begin.

While he won't have much time to let it sink in, he says it's been a journey full of memorable experiences.

This included an unexpected intervention from the police at the border between the Netherlands and Germany that had Atkinson worried.

"The two support guys had gone ahead, when they met two local policemen," Atkinson explains. "They told the police that a Premier League referee was on his way on his bike.

"So I am crossing the border when I see a police car with its lights flashing telling me to stop.

"The penny soon dropped that it was a stitch-up and we have a laugh, but I was worried for a moment.

"Those little memorable moments have helped us as we have gone along."