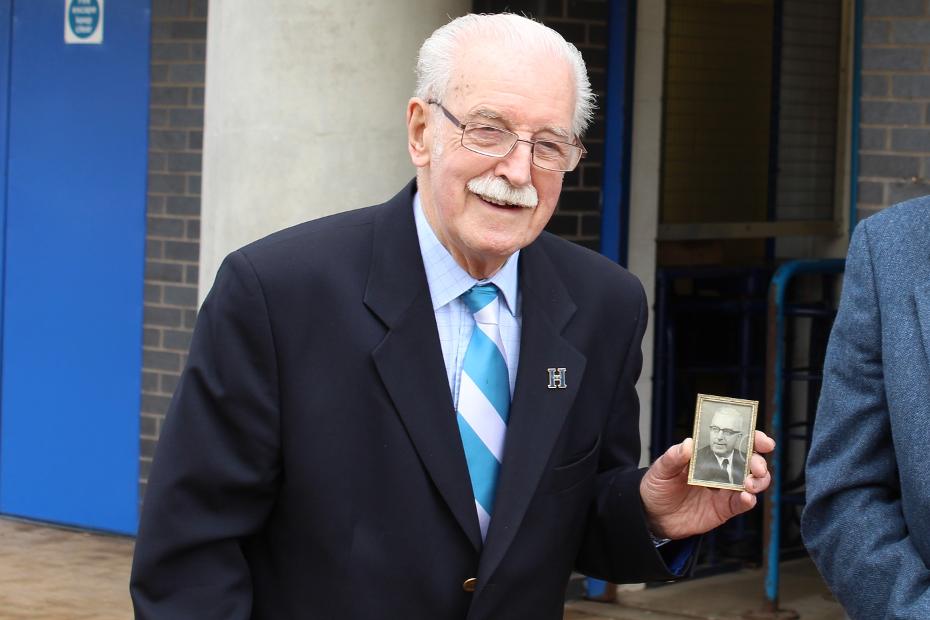 When Arsenal visit Huddersfield Town on the final day of the season it will be the last match for one long-serving club stalwart.

Duncan Haigh has seen millions of fans come to watch Town in his job as a supervisor of turnstiles.

He started working for the club a year after the Second World War ended, when he was only 14.

His dad, whose photo he is carrying in the picture above, got him to help out at Leeds Road, as Town's stadium was called then.

"If it rained, the ones who had paid the lowest prices to go in at the end wanted to transfer," says Duncan. "It was sixpence or something to get under the cover, so we used to have two transfer turnstiles on the side."

Seventy-two years later Duncan has decided to retire from helping to ensure a smooth entrance for supporters at the John Smith's Stadium and collating the attendance figures.

Duncan has seen the Terriers play in all four divisions, witnessing seven promotions.

He has already had a memorable April.

He celebrated his 86th birthday on Wednesday, a week after being presented with an "H" pin badge by club ambassador Andy Booth to recognise his commitment to his beloved Huddersfield Town.

Duncan is only the second person to be given such a badge by the club.

And as for his job? That is in safe hands. Like his father before him Duncan has passed it down to his son, Andrew, who is already a Terriers stalwart himself.

And his abiding memory after he monitors his last turn of the gates?

"I've made a lot of friends," Duncan says.