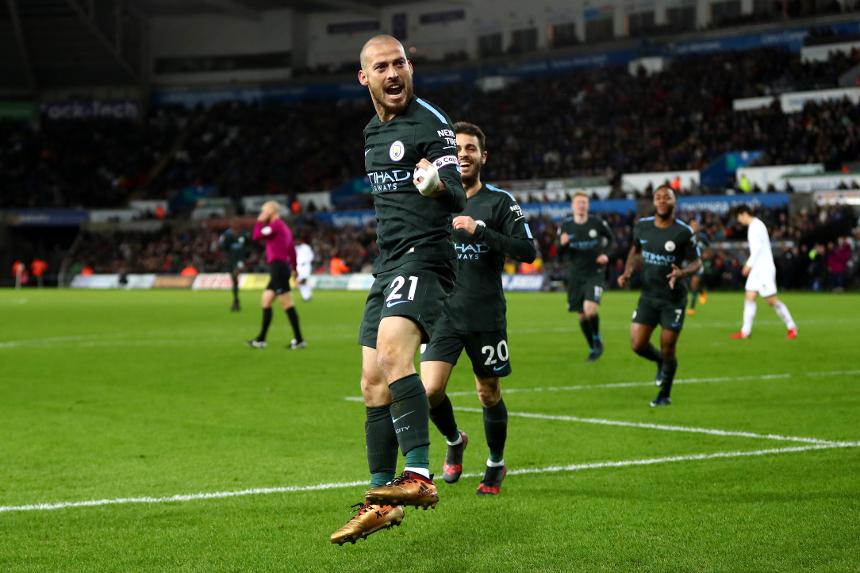 No Aguero, no problem as David Silva can help leaders achieve rare feat at Stoke despite striker's absence

Manchester City may be without their top scorer, Sergio Aguero, when they visit Stoke City on Monday, but the goal threat they pose from numerous sources is shown by a rare feat that is in their grasp at the bet365 Stadium.

Aguero is set to miss two weeks with a knee injury but his absence is unlikely to be felt, even if he is Man City’s top scorer.

During yesterday's training I had a discomfort on my left knee. The club's doctors told me I'll be back with the team in approximately two weeks. Now it's time for a full recovery!

The Argentinian has scored 21 of their 83 goals this season, next followed by Raheem Sterling, with 15. Leroy Sane and Gabriel Jesus are each only two goals from joining them on double figures in 2017/18.

And Pep Guardiola's side have similarly shared the load in creating goals.

David Silva is one assist from reaching 10 for 2017/18. The Spaniard would join Kevin De Bruyne, with 14 assists, and Sane, with 11, on double figures.

Only two teams in Premier League history have had three players provide 10 assists or more in the same season: Liverpool, in 1995/96, and Arsenal, in 2004/05.

The Gunners are the only team to ever have three double-figure hauls for both goals and assists, with Thierry Henry scoring 25 times, Robert Pires adding 14 goals and Freddie Ljungberg netting on 10 occasions in the 2004/05 campaign.

Man City have the chance to join them in that exclusive club on Monday night.