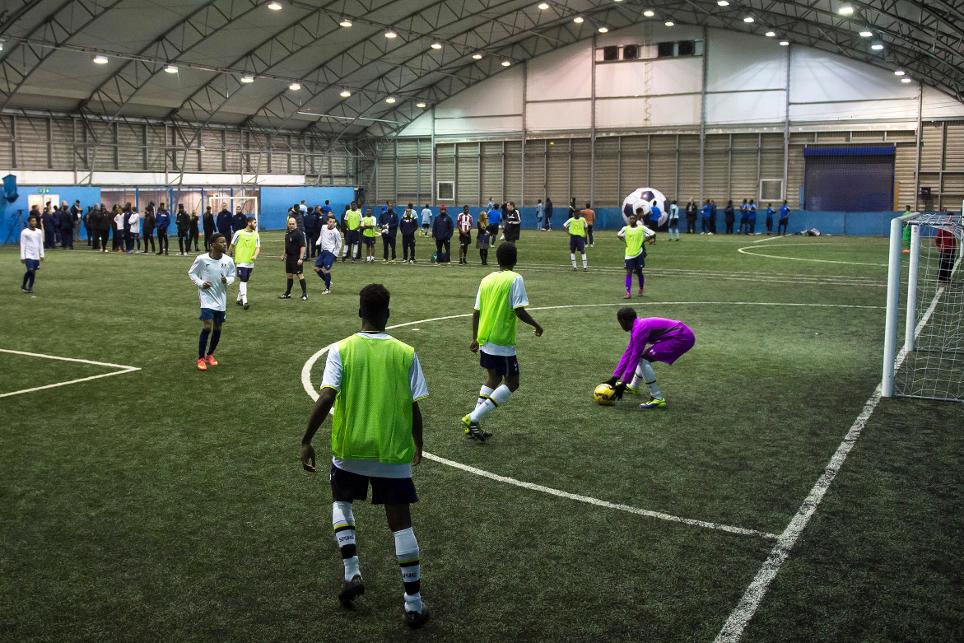 The scheme, an offshoot of the successful Premier League Kicks initiative, is funded by the Premier League and the Mayor's Office for Policing and Crime (MOPAC) and has just completed its first pilot year in 20 London boroughs. London PL Kicks, delivered by 12 football clubs in the capital, targets young people at the risk of crime, giving them the chance to turn their lives around by offering mentoring, coaching, career advice as well as the chance to take part in football sessions.

Here, participants and organisations taking part in the programme, explain how the scheme works and what impact it has on the young people involved.

Nkemjika Eka, 19, participant with Charlton Athletic FC PL Kicks: "I played for the Charlton Athletic Academy but got a back injury and ever since I went down the wrong road and I got myself involved with people and things that I shouldn't have. I went down a bad path. I decided to make that different choice because some of the people I would consider as my friends, I saw the path they went down and it didn’t lead to positive things. That's not what I want to be doing. I want to be doing something positive."

Jack Ironside - Community development officer, Arsenal in the Community: "When a young person is referred to us, we'll design a bespoke action plan. We will assess their needs, what they are interested in, their goals, what do they hope to achieve by working with us. Once we have that action plan in place, we will make an agreement with them about how we are going to work. It could range from anything from finding a course they want to go on, them coming along and doing some volunteering, or it could just involve mentoring on a day-to-day basis. It's a multi-pronged approach, not a prescribed programme. We try to keep it flexible. We do have regular sessions but we also work with in a unique way according to the individual."

Nkemjika: "The first night I turned up at Kicks I was a volunteer. I was really scared because I had never done anything like that before. I didn't know anyone and didn't know what to do. I didn't know the kids so I didn't know how they would react to me. I just thought, ‘I am just going to try to be positive and let them feed off my positive energy.' Now, some of the kids I work with do look up to me. When they see me, they want to be around me, it's just so good."

Sergeant Mark Carroll, Newham: "The clubs and the Premier League is an incredible pull. For us as police, Kicks provides that conduit to change someone's behaviour. Take the uniform off, talk to the young people and the barrier goes. In a few weeks I will put the uniform on again and they will say, 'You're a police officer, you're all right.' Then you start to engage. Once you have broken those barriers down, got the engagement going, you can give them the direction they need."

Jack: "We have 30-40 structured sessions a week with young people with PL Kicks but we also do things outside of that. You might spend an afternoon with someone writing a CV, for example. It depends where the young person is in their stage of development. Some might be doing absolutely nothing and their achievement is coming in and having a cup of tea and a chat about what they are doing in life, whereas others are ready to apply for work."

Nkemjika: "PL Kicks has helped me bounce back from all the bad things that were happening. When I am around the Kicks programme I feel I am in a family. I feel at ease. I want to give the young people all the knowledge I have gained from my past experiences with football and bad things. I want to feed them information they may not necessarily get from other coaches that haven't been down that road."

Mark: "For some of these young people, having someone in their lives such as a mentor coach, it may be the first time they have had any kind of discipline or structure in their life that takes them away from offending and committing crime. Because they get the structure, you can then point them in the right direction, sit down with them, talk about many things, joint enterprise, drugs, knives and the consequences of their actions."

Jack: "We always work long-term. It's not just about working with a young person for one month and seeing how far you can get them, it's very much about keeping those relationships. People think that once you get someone into work, the job is done. But that's just the start of a new chapter. Work might be just one part of their life they need support in, there might be issues at home or issues in their community. It's a great next step for the original PL Kicks model. The original Kicks model is fantastic and has been since 2006. This is a natural development."

Mark: "Because PL Kicks is so popular in Newham, it promotes itself. It provides a service and it makes a major impact. The kids have changed. They have got older, more mature. They have learned that they go to football, they arrive on time, they need the right kit and they have to be disciplined. The scheme works. We have got 90-100 kids coming down to PL Kicks in Beckton. If you haven't got that facility, what are they going to be doing?"

Nkemjika: "It has changed my life. Without Kicks I don't know what I'd be doing now. It has given me a route into coaching. I just need to do my final assessment and I have completed my FA Level 2 coaching qualification. It's made a massive impact, not only on my life, but also on many young people's lives. I would never have thought I would be doing things like this. The world is my oyster and that is what PL Kicks does for people. I just have to stay in this positive environment and stay with the right people and hopefully I can do something great in my life."