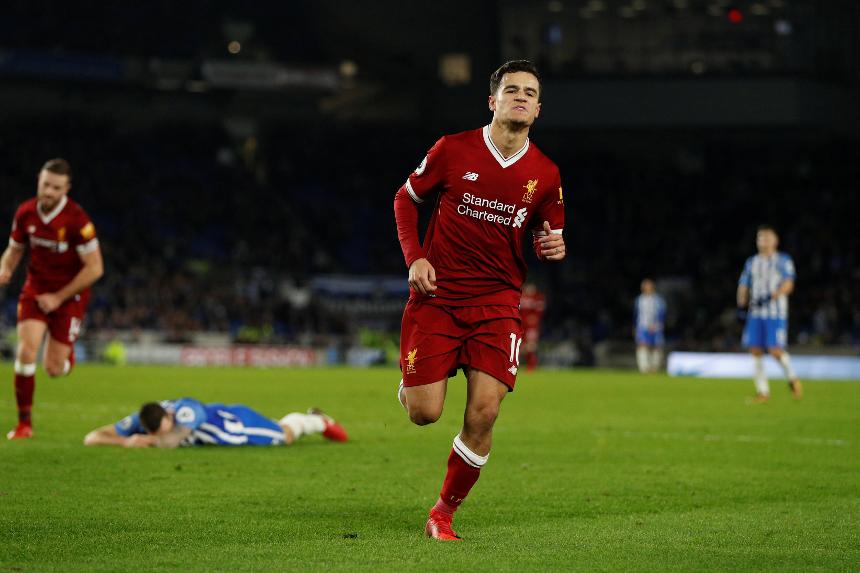 Phlippe Coutinho (£8.9m) is back at the forefront of Fantasy Premier League managers' minds following his return to form for Liverpool.

The midfielder features in the Gameweek 15 Dream Team for the third time from eight starts this season after scoring twice against Brighton & Hove Albion as the Reds enjoyed a goalfest at Amex Stadium, winning 5-1 on the south coast.

His 18 points was the best points return of the Gameweek and will have managers rubbing their hands at the prospect of more of the same in the Merseyside derby on Sunday.

The Brazilian is the second-most trasferred in midfielder with 103,796 managers swooping for his services.

Called into action following Wayne Hennessey's (£4.3m) injury in the warm-up, the veteran goalkeeper made seven saves in the 0-0 stalemate at West Bromwich Albion. He could now retain his start when the Eagles host AFC Bournemouth in Gameweek 16.

The Argentinian gained three bonus points despite conceding in a hard-fought 2-1 victory over West Ham United. His equaliser was a third goal of the campaign - joint-top with Marcos Alonso (£6.9m) among FPL defenders - while he is ranked second only to the Chelsea man for shots (17 vs 27).

Returning to the starting XI at right wing-back, Moses supplied two assists in the 3-1 win over Newcastle to earn a first Dream Team appearance of the season.

Two goals in the last five Gameweeks highlights the threat posed by the Belgian at Watford's set-plays. With six of Kabasele's next seven opponents scoring only two in the Fixture Difficulty Rankings (FDR), the centre-back could be an effective differential.

Overshadowed by team-mate Mohamed Salah (£9.9m) to this point, Coutinho is demanding the attention of FPL managers after his Gameweek-high 18 points. Limited to only eight starts, he has now delivered 7.9 points per match, unmatched by any other outfield player.

Continuing in a new attacking role up in support of striker Alvaro Morata (£10.8m), Hazard produced nine shots on his way to scoring twice in the win over the Magpies. He is averaging 9.3 points per match over the previous six Gameweeks, earning three bonus points on four occasions.

Lingard has delivered three goals and an assist in his last two matches as Manchester United's No 10. He has fired more shots (six) and created more chances (six) than any other team-mate over those outings.

Handed a first start since Gameweek 5, the winger produced his first attacking returns of the campaign with a goal in the 1-1 draw with Southampton. However, with three of his next four scoring four or more in the FDR, Fraser's short-term FPL potential looks limited.

A goal in the 2-0 win over Huddersfield Town means that the Icelander has now produced attacking returns in each of his last four Gameweeks. No Everton team-mate has supplied more shots (five) or created more chances (four) over that spell.

The Brazilian had scored only a single goal in his last 10 Gameweek appearances prior to the trip to Brighton & Hove Albion. But a brace and 13 points have now put him back on the FPL radar ahead of a favourable run of fixtures; five of his next six opponents score only two in the FDR.

A 12-point return in the win over Huddersfield has convinced over 85,000 FPL managers to swoop for the 20-year-old striker. He will now bid to see off competition from team-mate Oumar Niasse (£5.0m) to lead the line in Gameweek 16's Merseyside derby.