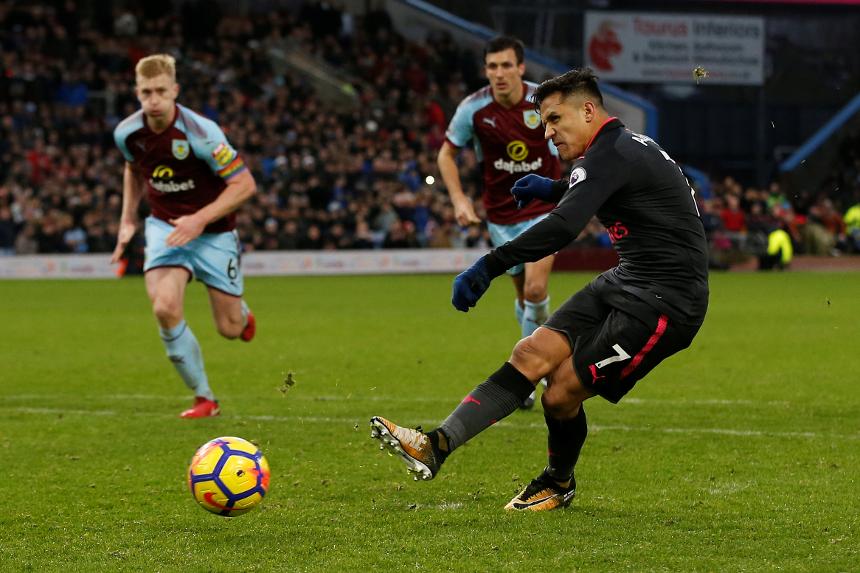 Alexis Sanchez’s stoppage-time penalty for Arsenal at Burnley on Sunday set a Premier League record and consolidated the Gunners as the team with the most goals in the 90th minute or later of Premier League matches.

But Arsene Wenger's side are not No 1 for winners scored in the last minute of normal time of matches or later.

The Chilean's spot-kick in the second minute of stoppage time at Turf Moor was the third consecutive match that Arsenal had beaten Burnley via a goal that late.

Sanchez's strike also marked the 25th time in the Premier League Arsenal had scored a winning goal in the 90th minute or later, but the Gunners are not the kings of late winners.

That crown is held at present by Liverpool, who lead this ranking with 29 winners, although they have not scored one since Sadio Mane did so at Goodison Park in the Merseyside derby 11 months ago.

Interestingly, despite the mythical status of goals scored in "Fergie time" for Manchester United under Sir Alex Ferguson, the Red Devils lie sixth in the rankings with 18 late winners.

But Arsenal do lead the table for goals scored overall in the 90th minute or later in the Premier League and are the only team to have reached three figures.

Sanchez’s winner was the 114th Arsenal have scored this late, consolidating their lead over Chelsea and United.