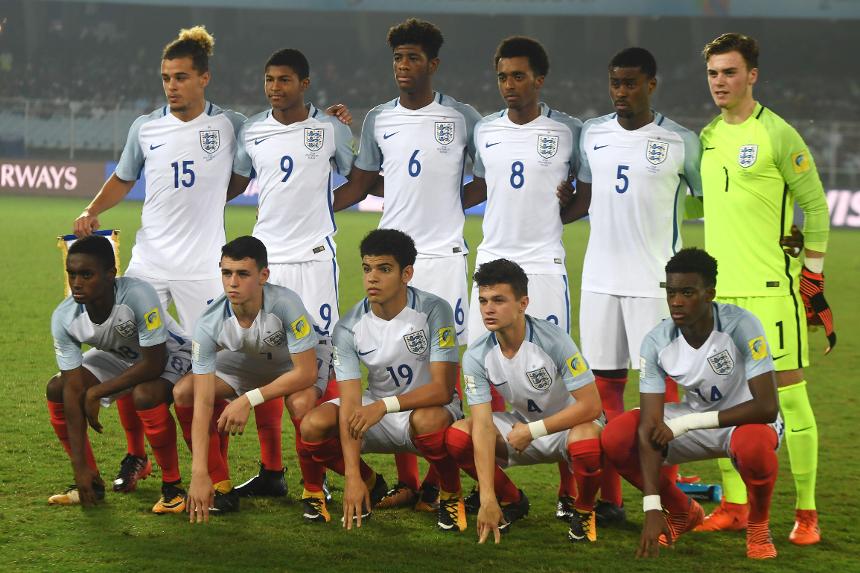 We profile the Academy players who triumphed against Spain in Kolkata

Following on from England's FIFA Under-20 World Cup triumph in the summer, the Young Lions claimed victory in the U17 competition, in India.

A squad from which 19 players are at Category One clubs, blooded in the Premier League's Games Programme as well as at The FA's St George's Park, came from two goals down to defeat Spain 5-2 in Kolkata.

Of the 21 players, 14 have been in the Academy system since the Under-9 age category, while another four joined before U11.

Interestingly, more than one third of the players (eight) were born between June and August.

Traditionally, boys born in the final quarter of the school year have found being the youngest in age groups a challenge to progression, something the Premier League has been looking to counter with bio-banding.

Here we profile the squad.

Curtis Anderson (Manchester City)
England's goalkeeper (pictured, No 1) has made 13 U18 Premier League appearances after joining Man City from Blackpool at U12 level.

Josef Bursik (Stoke City)
Signed from AFC Wimbledon this summer, where he had been since he was 12, Bursik has featured three times in PL2 and played a key role in England reaching May's UEFA U17 Championships final.

Steven Sessegnon (Fulham)
The twin of Fulham's Ryan Sessegnon, Steven (pictured, bottom row, far left) has come through their Academy and played twice in the Carabao Cup. He has also been on the bench in the Championship and has featured in the Checkatrade Trophy, PL2 and U18 PL in 2017/18.

Joel Latibeaudiere (Man City)
A regular for the 2016/17 U18 PL North Division winners, England captain Latibeaudiere (pictured, No 15) has risen to PL2, appearing five times this season and in the Checkatrade Trophy. He started out at Leeds United and moved toCity at U13 level.

Marc Guehi (Chelsea)
At Chelsea throughout his Academy career, Guehi (pictured, No 5) made 19 appearances for the U18 PL champions last season.

Jonathan Panzo (Chelsea)
Panzo (pictured, No 6) is another member of Chelsea's U18 champions and, like Guehi, has been at Chelsea from U9 level. He has also made three PL2 starts last season.

Timothy Eyoma (Tottenham Hotspur)
After featuring for the U18s last season, Eyoma has made five PL2 starts in 2017/18. The 17-year-old joined Spurs at U12 level.

Lewis Gibson (Everton)
Signed from Newcastle United this year, Gibson has made five PL2 appearances and featured in the Checkatrade Trophy. He started out at Middlesbrough before switching to Newcastle's U10s.

Tashan Oakley-Boothe (Spurs)
A product of Spurs' Academy, Oakley-Boothe (pictured, No 8) was on the Premier League bench against Burnley this season and made his senior debut in the Carabao Cup after featuring for the U18 and PL2 sides in 2016/17.

George McEachran (Chelsea)
Younger brother of Josh McEachran, George (pictured, No 4) worked his way up from Chelsea's U9s, was a member of the U18 champions and made his PL2 debut this term.

Conor Gallagher (Chelsea)
Gallagher scored five goals in 27 U18 PL appearances for the champions last season and made his PL2 debut in the same campaign. He has been at Chelsea throughout his Academy journey.

Nya Kirby (Crystal Palace)
The 17-year-old signed a professional deal at Palace in February 2017 after leaving Spurs and is a regular in their Professional Development League side.

Phil Foden (Manchester City)
Foden (pictured top, bottom row, second from left) has been on the bench for Pep Guardiola three times this season and made his debut in the Carabao Cup. In 2016/17, Foden scored 11 goals in 23 U18 PL matches. Named best player of the tournament. The midfielder has worked his way up from City's U9 team.

Callum Hudson-Odoi (Chelsea)
At 16, Hudson-Odoi (pictured, No 14) was nominated for September's PL2 Player of the Month. His Chelsea journey began at U9 level.

Rhian Brewster (Liverpool)
Brewster (pictured, No 9) has three goals in six PL2 appearances this season and was top scorer with eight goals in India, including hat-tricks in the quarter-finals and last four. He signed for Liverpool from Chelsea at U15 level.

Danny Loader (Reading)
As well as making his senior debut in the Carabao Cup in August, Loader has three goals in six PL2 matches this season. The striker started at Wycombe Wanderers before switching to Reading when he was an U13 player.

Emile Smith Rowe (Arsenal)
Smith Rowe, a product of the Arsenal Academy, has three goals in four U18 PL matches this season and has also featured in PL2 this term.

Jadon Sancho (Borussia Dortmund)
Sancho scored 13 goals in 21 matches across PL2 and U18 PL last season for Man City, whom he joined from Watford at U15 level. He moved to Dortmund in the summer, and was recalled by them after the group stages of the tournament.