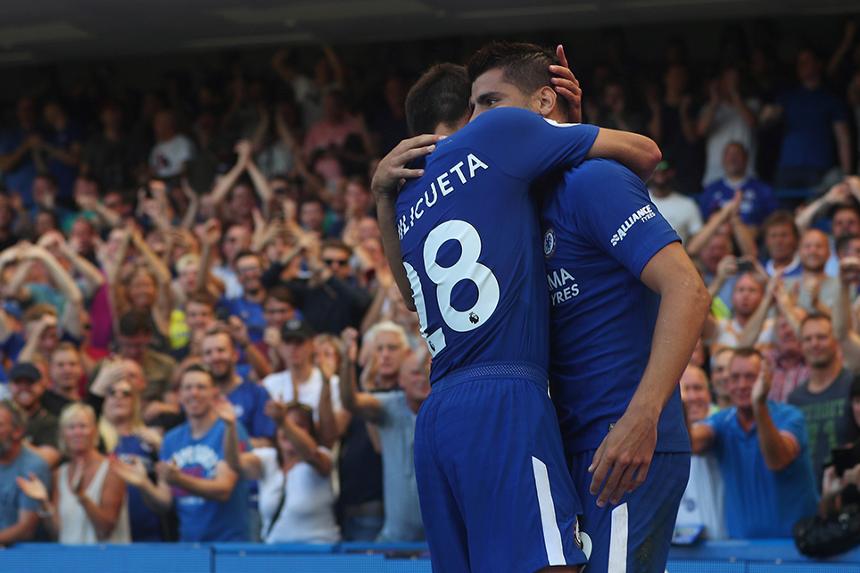 Cesar Azpilicueta has set up four of Alvaro Morata's six goals; the most effective combination in the Premier League

When Manchester City visit Chelsea on Saturday they will be wary of the threat posed by Eden Hazard, who could make his first Premier League start of the season.

But Pep Guardiola’s side would do well to watch out for the less obvious threat posed by one of the Blues’ defenders.

More significantly, the defender has quickly struck up a particularly profitable relationship with his fellow Spaniard Alvaro Morata, setting up four of the striker’s six PL goals.

That return represents the most assists from one player to the same team-mate this campaign – twice as many as any other combination, in fact.

Most assists from one player to another this season

Although it is still early in the season, the Azpilicueta-Morata relationship could well become a record-breaking one.

The benchmark for a single season is Mike Newell’s nine assists for Alan Shearer, and Stan Collymore’s nine for Robbie Fowler, both achieved in 1995/96.

A Chelsea pair sit at the top of the all-time list – Frank Lampard set up 24 goals for Didier Drogba during their time together at Stamford Bridge, a target Azpilicueta and Morata can continue to chase.

Azpilicueta could also challenge the record for the most assists provided by a defender in a season; Everton's Andy Hinchcliffe laid on 11 goals in 1994/95 and Leighton Baines matched that number for the Toffees in 2010/11.

Meanwhile, Morata has been involved in eight Chelsea goals after scoring six and setting up two – a greater goal involvement than any other player has managed in their first six Premier League matches for the Blues.