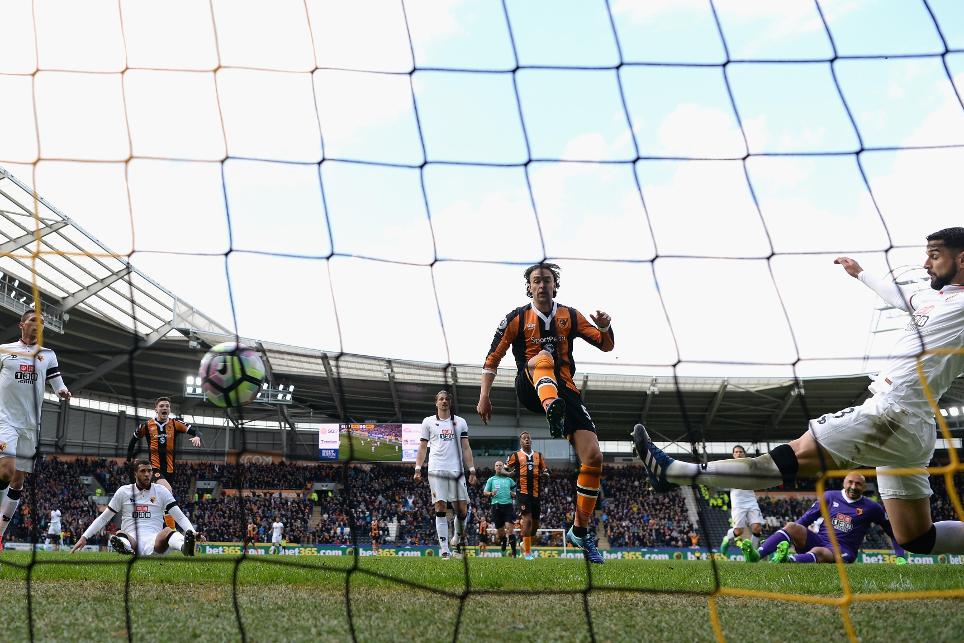 With only two matches left to play and Swansea City claiming victory over Sunderland, Hull City know that Sunday's visit to fellow strugglers Crystal Palace is now a match that they cannot afford to lose.

Ahead of that crucial match Adrian Clarke takes a closer look at the Tigers.

Sitting third-from-bottom, four points from safety and with the worst goal difference in the division, a draw is of little use to Hull City, so I expect them to show urgency and attacking enterprise.

However, balancing that positive approach at Selhurst Park will be of paramount importance. Should the Tigers leave the door open and fall behind, the stats tell us it will seriously damage their prospects of staying up.

Of the teams to have scored the opening goal in Premier League matches this season 70.4% have gone on to take all three points. Just 12.5% of those fast-starters have gone on to lose.

So whoever makes the first breakthrough in this high-stakes encounter will most likely emerge victorious.

A study of these two clubs’ reactions to going behind in 2016/17 exaggerates the importance of the first goal.

Big Sam has called on Palace to get the job done on Sunday. 💪

Sam Allardyce’s men have not won any of the home matches in which they have trailed 1-0 (a PL high of 13) but in the other five matches at Selhurst Park they have scored first and gone on to win. Only Leicester City have the same 100 per cent record at front-running on home turf.

On the flip side, Hull have salvaged a solitary draw from thirteen 1-0 deficits on the road.

Knowledge of those two track records may prompt caution, but with victory essential for the visitors, it will be incumbent upon them to take the initiative.

How bold will they be?

Away matches when opponent scored first

He may not have scored since joining the Tigers from Rennes in January, but Kamil Grosicki is their most in-form attacker.

At his best operating down the left wing, the 28-year-old’s pace and directness has troubled opponents in recent outings, so Crystal Palace will need to shackle him closely.

If they defend too deep and allow him to gather pace in 1v1 situations, the Poland winger will drive past the full-backs and deliver crosses with either foot.

Also a terrific set-piece taker, Grosicki has supplied quality ammunition across his last six appearances without getting the end-product his service warranted.

Marco Silva’s charges will try to supply him at every opportunity.

Silva has improved Hull’s defensive shape, reconfigured their midfield to help them control matches better and added pace inside the final third. They have been significantly better in all areas since he took charge.

Yet their away form remains disappointing. A dismal record of zero wins, two draws and six defeats on their travels under the Portuguese has left them heavily reliant on picking up points at the KCOM Stadium.

Silva has encouraged his players to show ambition on the road, and they have created plenty of chances, but far too many chances have been spurned.

As shown below, Hull are the worst away-team finishers in the PL, converting 5% of their openings at a rate of one goal for every 20 attempts.

The nature of last weekend's home defeat by Sunderland, will not have done their confidence any favours.

They fashioned 25 crosses from open play and had 16 efforts on goal but failed to score. Jordan Pickford was an inspired presence in the Black Cats goal, but once again Hull lacked ruthlessness inside the box.

While creating opportunities is a positive sign, they must be more clinical in the final two matches.

Hull have conceded a league-high 13 goals from corners this season; a flaw Allardyce will doubtless seek to exploit.

When you scrutinise the numbers, though, they are not as damning as they appear at first glance.

Three of those goals stemmed from lengthy second phases of play after the Tigers had cleared a corner, so can technically be discounted.

It should also be noted that Silva has also made progress when it comes to set-piece organisation.

In his 16 PL matches in charge, Hull have let in four goals from corners.

A switch from man-to-man to zonal marking has improved matters, but as Middlesbrough and Sunderland proved recently, their set-up is not yet perfect.

Silva likes to pack the near post with three men, and then place zonal defenders in a straight line eight yards out, leaving the six-yard box empty.

At home to Middlesbrough Marten de Roon profited from a second ball, poking home in space five yards out, while Sunderland’s Billy Jones ran through the line of static zonal markers to head in a near-post flick inside that body-free zone.

There is a strong chance the Portuguese tactician will tweak that configuration this weekend.

Hull are likely to have more possession than the hosts, and will try to take the game to the Eagles from the outset.

When they fashion goalscoring opportunities, it is vital they do not fluff their lines.

💬 | @23_Frog has likened the magnitude of Sunday's trip to @CPFC to a Champions League Final https://t.co/uFcLzT06Wa pic.twitter.com/JU8FLoTa7U

Crystal Palace will have their moments, of course, and whenever crosses are floated into the box they will need to get touch-tight to Christian Benteke, and disrupt his jump.

In those scenarios Silva will rely on Harry Maguire to perform this role.

Maguire is Hull’s strongest defender in the air, and has produced some inspirational performances in recent months, but if Benteke can isolate the smaller Andrea Ranocchia - as Peter Crouch did for Stoke City last month - then the visitors might be in trouble.

This is a high-stakes contest that really could go either way, but whoever scores first are likely to be smiling at the final whistle.