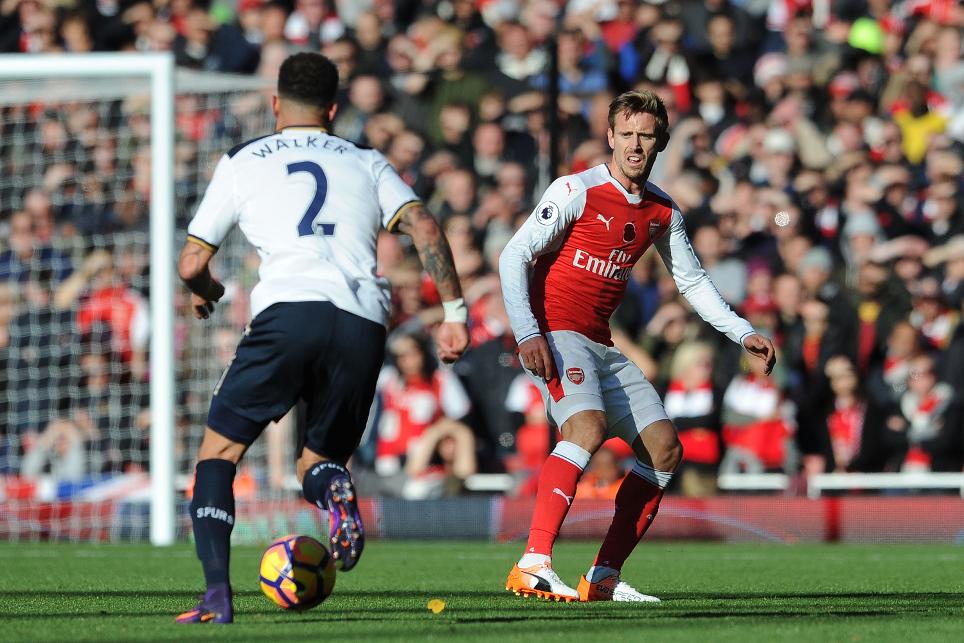 Do Spurs match rivals' new system or revert to a back four? Adrian Clarke on what may work best

Wenger - I expect it to be an open derby External Link

Victory for Tottenham Hotspur in this weekend’s north London derby, their last at the present White Hart Lane, would guarantee they finish above an Arsenal side managed by Arsene Wenger for the first time.

Adrian Clarke identifies some of the areas that could decide this pivotal encounter.

Sticking with a back three

Wenger’s surprise switch to 3-4-2-1 - his first use of a three-man defence since 1996/97 - has inspired his side to a trio of successive victories.

The presence of an additional central defender has given Arsenal more balance without the ball and an air of increased stability.

Away to an in-form Spurs side who have scored 17 goals in their last five Premier League matches at White Hart Lane, those qualities will be needed.

It will be a surprise if Wenger does not stick with this fresh shape for the derby.

Arsenal may feel more comfortable if Spurs match them up.

With only two attacking midfielders to monitor instead of three, a 3-4-2-1 set-up for both sides would afford Arsenal’s wide central defenders to get touch-tight to Dele Alli and Christian Eriksen, engaging them in the half-spaces between the lines.

They could effectively go man-to-man.

However if Pochettino goes with 4-2-3-1, the presence of a third attacking midfielder, Son Heung-min, would complicate matters, demanding greater defensive responsibility from Arsenal’s central midfielders.

The runs of Alli from deep would be a particular worry.

As soon as one of Spurs’ attacking quartet drops off, Arsenal will need to communicate quickly to pass the dangerous 21-year-old on to the nearest spare man.

Coming at a time when the Arsenal players are adjusting to new positions, mistakes could easily be made.

Arsenal’s system change presents Mauricio Pochettino with a tactical quandary he has yet to experience in a north London derby.

He must decide whether to match Arsenal up in a like-for-like formation, as he did so successfully at home to Chelsea, or continue with the 4-2-3-1 that worked so effectively in their last two home matches.

His decisive switch to a back four at half-time against Crystal Palace this week, a move that swung the match in his team’s favour, may also come into his thinking.

His players are comfortable within each framework, but their record is superior in a 3-4-2-1.

With athletic full-backs naturally pushing on, midfielders who are prepared to sit deep and shift across when called upon, and central defenders unfazed by being dragged to the wings, it is a balanced system that suits their personnel.

However, in a side containing Harry Kane, Alli and Eriksen, the manager cannot accommodate Son anywhere but in an alien wing-back role.

The South Korean is in excellent form, producing eight goals and two assists in his last eight appearances in all competitions, so Pochettino will be reluctant to leave him on the bench.

Taking this into consideration, and the issues it may cause for Arsenal, a 4-2-3-1 shape could be the way to go.

Wary of The Ox

Alex Oxlade-Chamberlain has proved his versatility by performing in six different positions in 2016/17.

The 23-year-old has been used on the left and right wings, the No 10 role, central midfield, right-back, and most recently as a right wing-back.

In this newest slot he has impressed, albeit across only two full matches.

His run and cross for Nacho Monreal in last weekend’s FA Cup semi-final win was an outstanding piece of football that capped a fine display.

It backed up a man-of-the-match performance at Middlesbrough, who struggled to live with his vibrancy.

Oxlade-Chamberlain used his athleticism and skill to push on into the final third with 10 successful dribbles across those two matches.

From those advanced areas he delivered 13 crosses from open play, four of which created chances.

So with Arsenal likely to sit deep at White Hart Lane, their new wing-back, who was rested against Leicester City in midweek, will have a key part to play in getting the Gunners further up the pitch.

We've got an update on who will miss #THFCvAFC and who is in contention to play...https://t.co/JNspNttSlU

His raids down the flank will be an outlet they will look to use at every opportunity, just as they did at Wembley, when he had the second-most touches (59) of any Arsenal player at the time he was substituted in the 106th minute.

Whoever plays on Spurs’ left will be kept busy this weekend.

Kane and Alli have been rightly lauded for their performances this term, but the influence of Eriksen should not be underplayed.

The Danish playmaker will be equally dangerous to the Gunners.

Eriksen’s last seven PL assists have all come at White Hart Lane, and eye-catching strikes against Southampton, Swansea City and Crystal Palace have served as a reminder of his goal threat.

During the second half of 2016/17, Eriksen’s end-product has been of an extremely high standard.

As well as having great ability on the ball, the Dane is also a nightmare to pin down.

Often listed on a teamsheet as a right-sided attacking midfielder, he moves around the pitch at will, causing rival players to pass him on whenever he leaves their domain.

Statistically Tottenham Hotspur’s hardest-working player, Eriksen ran 22.8km across the last two home matches at an average speed of 7.53km, both the highest of any Spurs man.

That sprightly movement means he is elusive and incredibly hard to contain.

Worryingly for Arsenal, conceding in that manner has been a constant issue for them across the entire season.

In six of the last seven PL contests away from Emirates Stadium, Arsenal have let in a goal from a right-wing cross.

Blocking crosses from Eriksen, and the the right-sided full-back, must be a priority for Wenger’s men.

If they stand off and allow a stream of balls to be played into their area from that side, Spurs could be in business.

Spurs should dominate possession and dictate this north London derby, with Arsenal likely to sit deep and strike on the counter.

When this happens, screening the service into Kane is an area Arsenal would be wise to focus on.

Jan Vertonghen and Eric Dier are always looking to slide passes into their striker, who is then quickly supported by midfield runners.

A moment of magic from @HKane in the last north London derby at White Hart Lane... #COYS pic.twitter.com/dwzerhmMYn

Blocking that route and instead forcing the hosts to go from side to side will slow down the hosts’ rapid attacks.

Arsenal must also avoid taking risks inside their own half. Spurs are at their most dangerous from turnovers, so missing out the midfield with longer distribution may form part of their game plan.

Pochettino’s title-chasers have to start as favourites.

They attack in a structured and mechanical way at times but providing they replicate recent home displays, Arsenal will require a very special defensive performance to stop them.