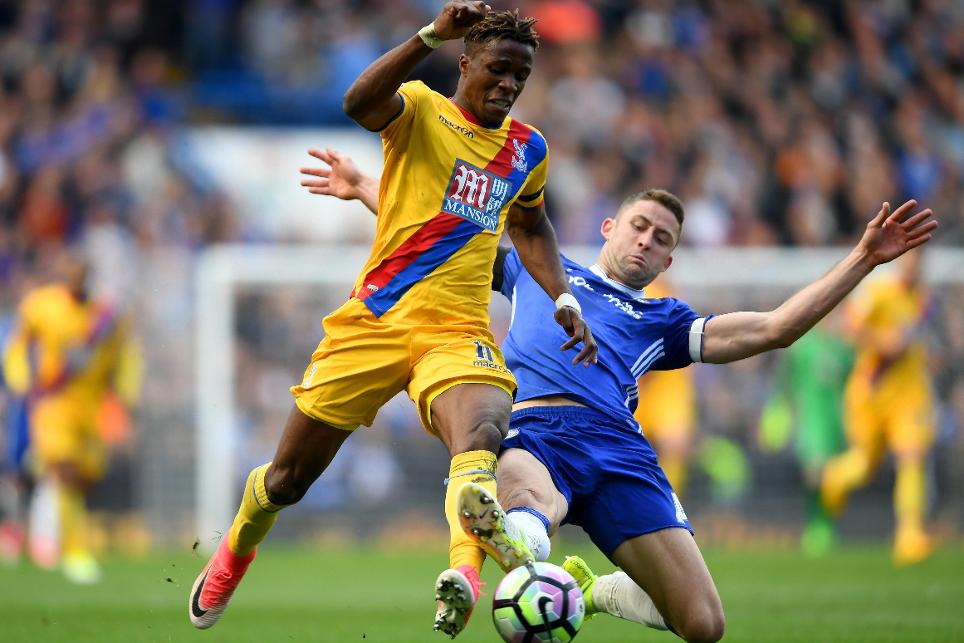 Ahead of tonight's match, Adrian Clarke looks at why Crystal Palace winger has become their most dangerous player

Big Sam: I Can See It Going Down To The Wire External Link

A resurgent Crystal Palace have lifted themselves to 16th place in the Premier League, but face a tough test when Arsenal visit on Monday.

At the age of 24 Wilfried Zaha is making his mark as a top-class Premier League performer.

His electric pace and willingness to take on defenders has always marked him out as one of the most exciting players to watch, but a lack of consistent end-product has tarnished his reputation.

The criticism was reasonable. Six Premier League goals and three assists over the previous three seasons was disappointing for someone of his talent.

During 2016/17, we have witnessed a dramatic improvement.

Boasting six goals and seven assists in this campaign alone, Zaha is producing enough to be considered Crystal Palace’s most dangerous and reliable forward.

What is interesting is that Zaha is not seeing more of the ball, or having greater involvement inside the final third.

He has perhaps been handed more freedom to break into central areas, but that alone is not the reason behind his upturn.

Zaha’s decision-making and improved technique has helped him turn the corner.

Choosing the right moments to deliver the correct choice of shot, cross, or pass, he has matured as a footballer.

The third-most successful dribbler in the top flight (behind Adama Traore and Eden Hazard) the Ivory Coast international also happens to be the most-kicked player in the PL.

Last season he was fouled more than anyone else (90 times) and he leads that table again, earning more free-kicks than ever.

In a team who traditionally rely on attacking set-plays, this makes Zaha an ideal fit for Palace.

Arsenal’s defenders must try not to dive in on Zaha too often on this evening.

The absence of a bona fide defensive midfielder created instability without the ball for Palace during the first half of the season.

Jason Puncheon, Joe Ledley, Yohan Cabaye and James McArthur were all asked to do a job in that role, but it did not suit their natural game.

Sam Allardyce's signing of Luka Milivojevic from Olympiacos in January has remedied the issue.

Happy to station himself in front of the back three or four Milivojevic is mobile, aggressive and disciplined. He is a specialist in that position.

Making 2.84 interceptions and three clearances per match, covering more distance on average than any of his Palace team-mates (11.45km) the 25-year-old has added excellent off-the-ball qualities to the side.

His presence makes it harder for opponents to expose the Palace defence, while also freeing up Puncheon and Cabaye to push forward.

At his most comfortable alongside James Tomkins within a traditional back four, Crystal Palace conceded just once in the 308 minutes when the well-balanced pair have played together.

A calf problem for Tomkins, an injury that forced him to miss the midweek loss at Southampton, is a real blow for Allardyce.

Find out all that and more in the preview!https://t.co/f4TPyLrpND

Sakho has enjoyed being part of a narrow back four that does not hold its line too high. Appearing less isolated than at Liverpool, the Frenchman has stood firm to great effect.

Clearing the ball 7.2 times per match and regaining possession on 7.8 occasions each time he plays (both the highest of any Palace regular) Sakho is a defensive leader.

The Milivojevic and Sakho effect

It is an unusual statistic, but 81.8% of Christian Benteke’s goals for Palace have come away from home.

In theory, without his nine strikes on the road, the Eagles would have eight fewer points.

Scoring a quartet of towering headers, two six-yard box tap-ins, two penalties, and that clever counter-attacking finish at Chelsea last weekend, his form has been outstanding on their travels.

In fact, only Alexis Sanchez and Sergio Aguero have scored more away goals.

On the flip side it is a concern the Eagles have not extracted more from the powerful Belgian on home turf.

Benteke, 26, has only scored in one of 13 appearances at home and, with five of their eight remaining fixtures at Selhurst Park, this problem needs to be resolved.

Sometimes guilty of tightening up, the former Liverpool striker must learn to relax when chances fall his way at home.

Crystal Palace’s form has been good, but they are suffering an ill-timed injury crisis ahead of this fixture.

With 11 players either sidelined or considered doubtful, they top the table when it comes to absent first-teamers.

This situation will frustrate Sam Allardyce, especially as the Eagles’ manager had just hit on a successful formula.

Between 25 February and 1 April Allardyce made only one enforced change to his starting XI, and the continuity worked brilliantly.

During four straights wins, using a well-structured 4-1-4-1 shape, only one goal was conceded.

During the 3-1 defeat at Southampton, a rejigged Palace looked less comfortable, and at half-time Allardyce reverted to a 3-5-2.

It will be fascinating to see which formation he uses against the Gunners.

It's time to stand up and be counted. 💪

Crystal Palace have become a more rounded side in recent weeks, with the players showing a better understanding of their manager’s instructions.

Resolute and well-drilled out of possession, the Eagles have been harder to break down, which in turn has provided their talented attackers with an easier platform to shine.

Although statistically creating less, the quality of their opportunities has increased.

Palace have also stemmed the flow of set-piece goals scored against them, which was crucial.

Under the previous regime, 43% of their concessions were from dead balls, but that figure has dropped to just 18% under Allardyce.

Hard work on the training ground has paid off in this department.

Last but not least, an upturn in form from goalkeeper Wayne Hennessey has also made a difference. The Welshman has been superb of late, making a string of fine saves.

If Hennessey maintains those levels, Arsenal could be in for a frustrating evening.