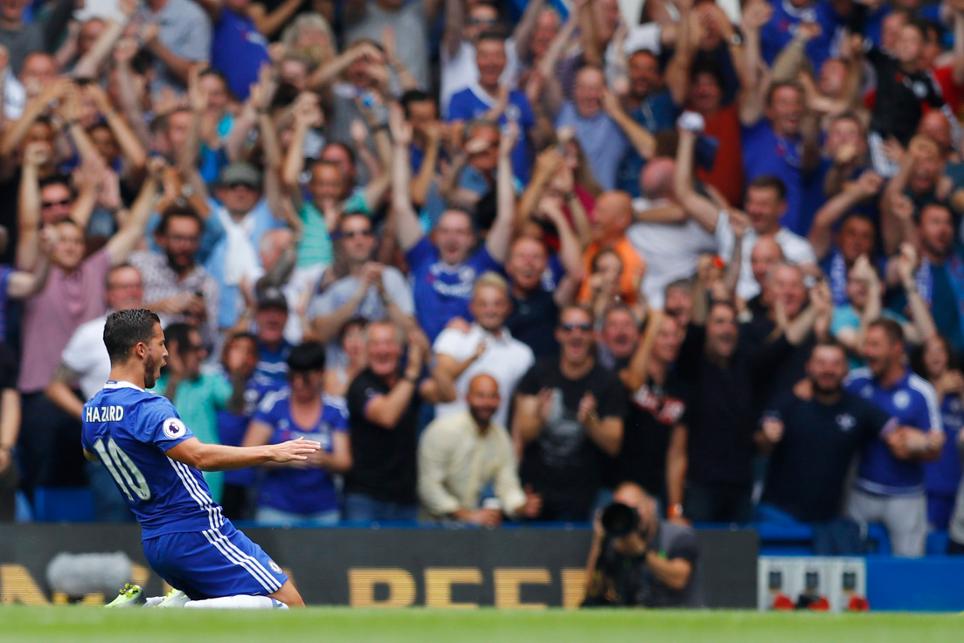 Having missed the Gameweek 29 win at Stoke City, Hazard has been sold by more than 63,000 Fantasy Premier League managers but looks set to regain his starting berth at the expense of Willian (£7.0m) in the Blues’ front three.

Conte will also check on the fitness of a trio of first-team regulars, with Diego Costa (£10.7m), Thibaut Courtois (£5.9m) and Victor Moses (£5.6m) all to be assessed.

Despite an injury scare over the international break, Costa has been drafted in by more than 42,000 FPL managers and, owned by 39%, is likely to be the most popular Gameweek 30 captaincy pick.

Liverpool have concerns in midfield ahead of the Merseyside derby after Adam Lallana (£6.9m) joined Jordan Henderson (£6.2m) on the sidelines with an injury sustained on international duty.

Subject to more sales than any FPL midfielder (64,000) since the previous deadline after picking up a thigh problem on England duty, Lallana’s absence is likely to mean that Lucas Leiva (£4.4m) joins Emre Can (£4.7m) and Georginio Wijnaldum (£7.5m) in the centre of the park.

Everton make their way to Anfield with defensive concerns mounting.

Seamus Coleman (£6.0m) sustained a season-ending leg injury while featuring for Republic of Ireland and Ramiro Funes Mori (£4.8m) has been sidelined with a knee problem.

Manager Ronald Koeman is likely to call upon Mason Holgate (£4.0m), either as a right-back or part of a back-three in the weekend’s early kick-off, presenting FPL managers with a new defensive option in the budget bracket.

#MUFC's @juanmata8 has had surgery for a groin injury. Further updates on his recovery will follow in due course. #MUFC. pic.twitter.com/nD2KQ5aBCR

Manchester United were handed a blow by the news that Juan Mata (£7.3m) has had a groin injury operated on and will miss their home match against West Bromwich Albion and beyond. There are also worries in defence after both Chris Smalling (£5.8m) and Phil Jones (£4.7m) suffered injuries.

With Zlatan Ibrahimovic (£11.4m) serving the last of a three-match suspension and Paul Pogba (£8.2m) still sidelined due to a hamstring injury, manager Jose Mourinho could turn to the fit-again Wayne Rooney (£8.6m) against the Baggies.

Southampton’s Manolo Gabbiadini (£6.9m) is ruled out of Saturday’s derby with AFC Bournemouth due to a groin problem sustained against Tottenham Hotspur in Gameweek 29.

Either Shane Long (£6.1m) or Jay Rodriguez (£6.0m) will deputise, with Gabbiadini possibly in line for a return for Gameweek 31 against Crystal Palace.

Manchester City head coach Pep Guardiola can call upon Kevin De Bruyne (£10.4m) for Sunday's trip to the Arsenal, with the midfielder recovering from a groin problem picked up during the break.

The Gunners will be without Petr Cech (£5.4m) due to a calf issue, with David Ospina (£4.7m) set to play between the posts.

Meanwhile, Troy Deeney’s (£6.9m) start for Watford for their home encounter with Sunderland is in doubt having suffered from illness over the break.

Head coach Walter Mazzarri has indicated that his skipper may feature from the bench, which could hand M’Baye Niang (£5.9m) the chance to lead the line, with Stefano Okaka (£5.1m) or Nordin Amrabat (£5.0m) utilised out wide against the Black Cats.

Deeney has been signed by 30,000+ new owners ahead of Gameweek 30 having scored in five of his last seven outings.