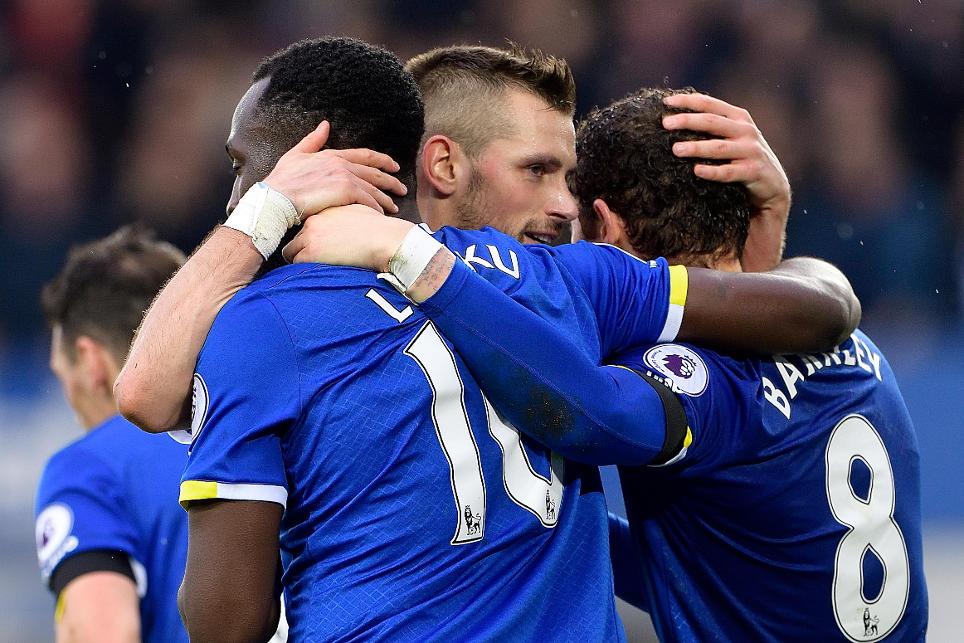 View From The Other Side: Jamie Carragher External Link

Everton’s record in recent Merseyside derbies is poor, but they approach Saturday’s encounter with Liverpool in splendid form. Thanks to an outstanding start to 2017 they boast 12 more points than they did at this same stage last season.

Adrian Clarke studies the reasons behind their revival and how they can earn a first Premier League win at Anfield since September 1999.

Keeping the goals out

Since conceding a stoppage-time winner at home to Liverpool on 19 December, Everton have kept eight clean sheets in 12 Premier League contests. This defensive resilience has been the cornerstone of their improved fortunes.

When you study the data, rival teams are attempting marginally more shots on their goal than they did before Christmas (an increase from 3.6 to 3.7 per match on target) so great credit must be given to Joel Robles, the goalkeeper.

Since taking over from Maarten Stekelenburg (save ratio 63%) the agile Spaniard has not only been an extremely reliable presence, he has become statistically the best shotstopper in the division.

Two other new faces are also contributing to Everon’s improvement.

Academy graduate Tom Davies and January recruit Morgan Schneiderlin have each given the side a welcome dose of dynamism.

On and off the ball they cover an awful lot of ground. Davies and Schneiderlin are ranked second and third for Everton in this department, their mobility helping them close opponents down quickly.

Marrying quality on the ball with high energy levels, Ronald Koeman’s side are far harder to play against when these two midfielders are involved.

When you consider that this pairing is usually complemented by Idrissa Gueye, the Premier League’s most prolific winner of tackles, it is little wonder the Toffees look so much stronger down their spine this term. Their midfield has been completely reinvigorated.

See: Players with most tackles

How Davies and Schneiderlin rank at Everton

* Based on players with 5+ PL appearances

It is no coincidence that since Christmas Everton’s average distance covered has shot up from 107.2km per match to 112km.

Having high-energy players on the pitch is also impacting on the way Everton finish their matches, too.

During the last 15 minutes of PL contests, the Toffees boast an incredible 22-4 goals record.

Remarkably, 17 of those late strikes have arrived in the last 12 fixtures.

At present no team is as dangerous as super-fit Everton when the clock is ticking down to the final whistle.

Barkley on the right

Since taking charge at Goodison Park, Koeman has consistently challenged Ross Barkley to deliver on his undoubted talent, and during the past three months the 23-year-old has produced some sparkling performances.

The England international has five assists and two goals in his last 11 PL starts, playing a key role in their surge up the table. So what has changed?

Compared with earlier this season, Barkley has been used further forward, either just behind striker Romelu Lukaku or as a right-sided wide-man who can drift infield when the Toffees have possession.

Barkley’s decision-making from the right flank has been fantastic. Selecting the correct moments when to roam, and when to keep his width, he has played with increasing maturity.

That freedom and intelligent movement has made him harder to track and Barkley is consequently seeing more of the ball in the most dangerous areas of the pitch.

Taking up positions in half-spaces between opponents he has been highly influential, and from those pockets, his combinations with Lukaku have caught the eye.

Lukaku is the Premier League’s top scorer with 21 goals. He will be the man Liverpool fear most this weekend.

Able to score with both feet and his head, there is no fail-safe method of stopping the in-form Belgian, even if the positions he takes up are relatively predictable.

Although strongest with his left foot, the 23-year-old striker likes to do most of his damage in the right-hand channel. He will show for the ball with more enthusiasm in that area of the field.

To put this into context, during his last five PL appearances Lukaku has touched the ball 100 times inside the opposition’s half to the right of centre, compared with 43 to the left.

Inside the penalty area that breakdown equates to an 18-7 split.

While three of Lukaku’s 21 league goals this term have been scored from the exact centre of the goalmouth, 13 have stemmed from shots or headers when he was to the right of the penalty spot.

Liverpool’s left-sided centre back, Ragnar Klavan or Dejan Lovren, plus left-back James Milner will have their hands full on Saturday, as Lukaku will gravitate to their side at every opportunity.

It was a blow to lose the marauding right-back Seamus Coleman to a long-term injury this week, and it could prompt a tactical reshuffle by Koeman.

The 20-year-old Mason Holgate is perhaps the most likely man to deputise, but there is a possibility that the Dutchman, who is never afraid to embrace change, will tweak his system.

Only three PL clubs have deployed more than the nine different shapes used by Everton in 2016/17, so it is never easy to second guess their approach from one match to the next anyway.

What makes Everton’s excellent run of form (P12 W8 D3 L1) all the more admirable is that they have tinkered with formations throughout this period.

In their last 12 PL fixtures the Toffees have lined up in five different configurations, including the frequent use of three at the back.

To rotate shapes so frequently without suffering adverse results is a testament to the thorough preparations Koeman and his staff enforce on the training ground.

Everton are in form, but history is against them. It is six-and-a-half years since they last beat Liverpool, and they have not won a derby at Anfield since September 1999.

Their performances on the road this season have also lacked consistency. Accruing only 16 of their 50 points away from home, they have a minus-three goal difference on their travels.

Slow starts have been an issue. Under Koeman they are yet to lead at half-time away from home.

I have a hunch the Dutchman may adopt a bolder approach on Saturday, by chasing the first goal.

Liverpool have generally struggled against sides who have sat deep and countered, but on their last away trip to Tottenham Hotspur a cautious approach did not suit Everton.

With too many men behind the ball, they lacked a threat until Koeman threw caution to the wind late on.

Everton have been at their best when playing high-tempo football that aggressively knocks opponents on to the back foot.

This could be the best way to put pressure on Jurgen Klopp’s defence.

Everton are certainly playing well enough to end their hoodoo against Liverpool, but to win on Saturday lunchtime they must use their athleticism and be assertive.

With the opportunity to halve their great rivals’ league advantage over them to three points, this will be a genuine test of their top-six credentials.