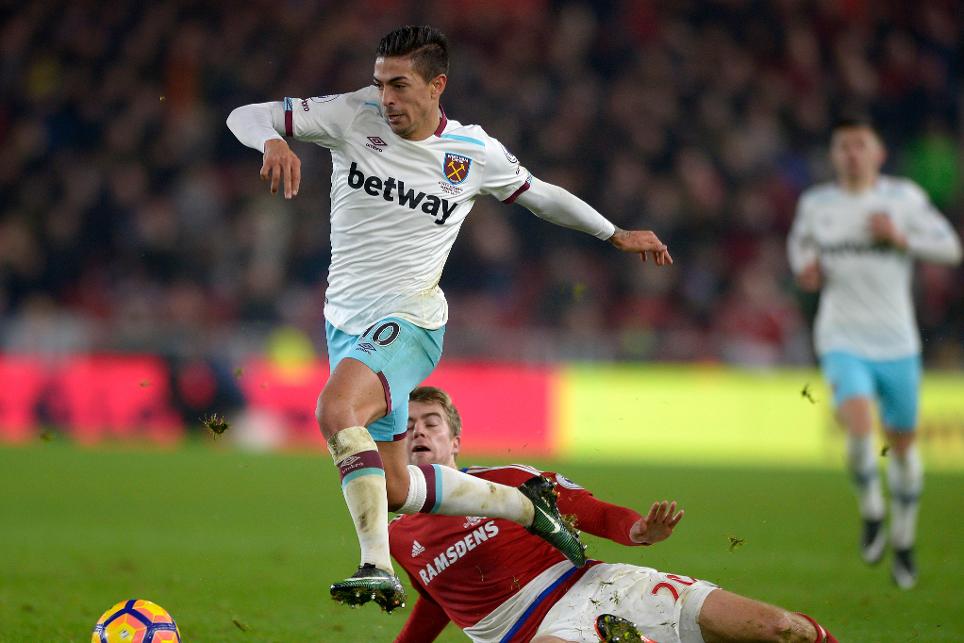 In the absence of Dimitri Payet (£9.0m) West Ham United's Manuel Lanzini (£6.3m) has responded to boost his appeal as a potential Fantasy Premier League asset.

With manager Slaven Bilic looking to the Argentinian to step up, Lanzini has obliged, providing a goal, two assists and four bonus points over his last two Gameweek starts.

During that period, he has created seven goal scoring opportunities for team-mates – joint-top with Manchester City’s Kevin De Bruyne (£10.5m).

As evidenced in the Gameweek 22 win at Middlesbrough, where he supplied a corner-kick assist for Andy Carroll’s (£6.3m) headed opener, Lanzini has been afforded the majority of West Ham’s dead-ball duties in Payet's absence.

He has also boasted a promising goal threat, matching team-mate Michail Antonio (£6.9m) for shots (five) and attempts inside the opposition penalty area (three) over that period.

Indeed, only Carroll, with eight efforts on goal, has registered more attempts than the South American for the Hammers.

Whereas team-mate Antonio is the fifth-most transferred-in FPL midfielder in the Gameweek, with more than 31,000 new owners, less than 6,000 have swooped for Lanzini.

But when assessed against his previous performances over Gameweeks 1-20, it is clear that he has become far more influential as a result of Payet’s omission from the Hammers’ starting XI.

With his chances created improving from an average of 1.2 to 3.5, his ICT Index score has soared from 4.5 to 12.5 as he becomes far more prominent in his side’s attacking ploys.

Bilic’s side have excelled with Lanzini as their midfield architect and welcome Manchester City’s porous defence having scored six goals over their last two matches.

City will arrive at the London Stadium with just two clean sheets away from home all season, with four goals shipped in two of their previous four road trips.

Owned by a mere 0.5% of FPL managers, Lanzini’s new status as the Hammers’ playmaker could yet see him emerge as a “differential” candidate for the second half of the season.