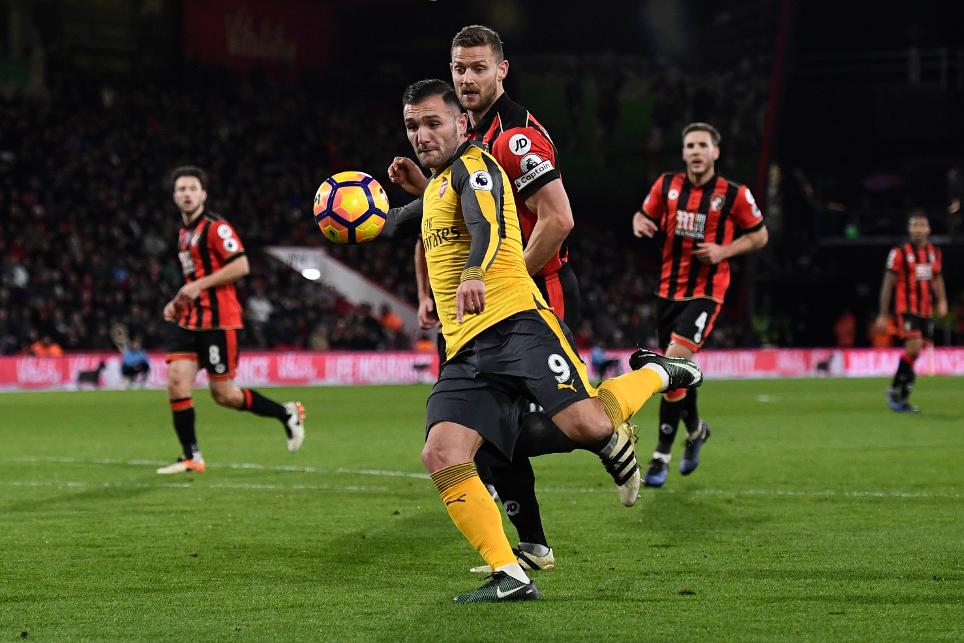 What did Arsenal do to recover from 3-0 deficit to earn point at Vitality Stadium? Adrian Clarke explains all

After analysing how Ronald Koeman masterminded Everton's victory at West Bromwich Albion this season, and Pep Guardiola's tactical changes in the Manchester derby, Clarke explains how Arsene Wenger pulled of a great escape from 3-0 down against AFC Bournemouth.

He only had 11 touches and made just six passes in total, but a 33-minute cameo from Lucas Perez at the Vitality Stadium, has to go down as one of the most inspired substitutions of the season so far.

Losing 3-0 after 62 minutes, some will say Arsene Wenger had no option but to throw the Spanish striker into the fray against AFC Bournemouth in place of Alex Iwobi, but it was how he used Perez that took many observers, and possibly the Cherries too, by surprise.

Rarely deviating away from a 4-2-3-1, it is an extremely rare occurrence for Wenger to line up Arsenal in a standard 4-4-2.

But that is the system he chose when sending on his summer signing.

Instead of being used on the flanks, Perez was told to go up front and make a nuisance of himself. His sole intention was to capture the attention of AFC Bournemouth’s spare central defender, and create confusion with his movement inside the final third.

It worked. The extra body in and around the penalty area made Eddie Howe’s men nervous.

Arsenal’s first goal owed much to the presence of a second striker. Showing for the ball 25 yards out, Perez linked play from a position Olivier Giroud would usually have to occupy as the lone forward.

This allowed Giroud to loiter inside the penalty area instead, and as the right-wing cross came in from Alex Oxlade-Chamberlain the Frenchman was in the right position to provide a vital touch, flicking the ball on to Alexis Sanchez to score.

Perez scored Arsenal’s second goal in a move that showcased how effective this strike duo could be.

As the ball was fed into Giroud by Granit Xhaka, the Spaniard made a short but clever burst across Giroud into space behind him and, after collecting a subtle one-touch pass, he volleyed in left-footed.

Without a striker like Perez to make runs off Giroud, this goal and Arsenal’s unlikely comeback would never have occurred.

Arsenal do not know how important the point from this 3-3 draw will be, but if it makes a difference in the title race, this second-half change will be remembered fondly.

Tomorrow How Conte broke though the West Brom wall