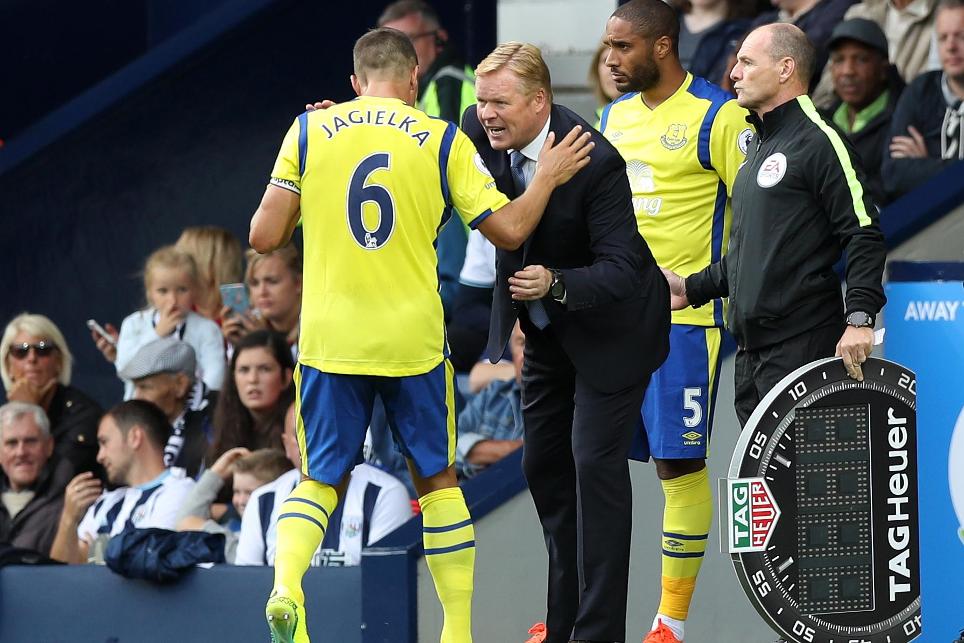 In series on mid-match changes, Adrian Clarke on how Everton manager's boldness was rewarded at Hawthorns

Reid: We've Got So Much Talent External Link

If a gameplan isn’t working many managers prefer to wait until the second half before going to Plan B.

Not Ronald Koeman. The Dutchman has built a reputation for firm decision-making, and his bold and astute call earned a first win as Everton manager at West Bromwich Albion in August.

With Romelu Lukaku unfit to start, Koeman started the quick-footed Gerard Deulofeu as his lone striker, in a new 3-4-2-1 formation he had spent pre-season fine-tuning with his players.

Koeman was hoping Deulofeu’s skill and movement would trouble a West Brom back four full of six-footers.

With Everton 1-0 down from a set-piece, and with their diminutive Spaniard making no headway against Albion’s physically imposing defence, Koeman ripped up his formula to start afresh after just 38 minutes.

On came Lukaku for the makeshift right wing-back, James McCarthy, Kevin Mirallas moved to wide left and Deulofeu was switched to the right.

With West Brom staying compact and sitting deep to protect their advantage, it was an intelligent call.

“If you go 1-0 down and they drop back even further, you really need a target man; you need to make the pitch wider,” Koeman said afterwards. His logic made perfect sense.

As shown in the heat maps Everton used the width of the pitch better within the 4-2-3-1, which in turn helped them push further up field.

Encountering opponents who wanted to be narrow, the Leighton Baines/Kevin Mirallas and Mason Holgate/Deulofeu partnerships down either wing created overloads that West Brom were not comfortable dealing with.

Once they equalised on the stroke of half-time Everton never looked back, producing 10 second-half shots, compared with three before the interval, and grabbed the winner on the hour.

Lukaku didn’t score, but his physical presence, coupled with the change in approach, swung the match in Everton’s favour.

Admitting he had got his initial tactics wrong would not have been easy for Koeman, but his 38th-minute rethink paid off.