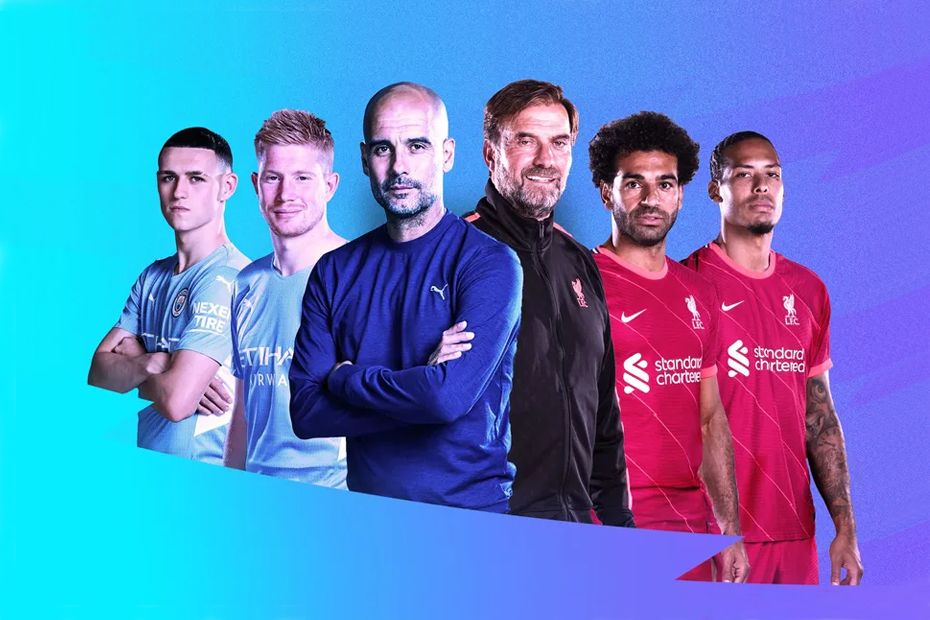 Dixon: I'd rather be in City's position in title race

Guardiola: I sleep soundly with trust in my players External Link

It's first v second as Manchester City and Liverpool go head-to-head on Sunday, and the stakes could not be higher.

With only eight matches left to play, the winners this weekend will have their fate firmly in their own hands in the Premier League title race.

It has become a familiar story in the era of Pep Guardiola v Jurgen Klopp, with the meetings between the clubs becoming increasingly significant in asserting dominance for the season ahead or deciding who lifts the Trophy.

Here we look at highlights of some of the key duels between these great rivals.

2017/18: After Man City triumphed 5-0 in a statement win at the Etihad Stadium in September 2017, Liverpool hit back in the reverse fixture to score a psychological point of their own, inflicting one of City's two defeats that season.

The Reds put on a stunning display to go 4-1 up at Anfield, before surviving a late scare. While it was not enough to reignite the title race, with City earning a Premier League record 100 points, Liverpool had laid down a marker for the following campaign.

2018/19: One of the closest-ever title races came down to a matter of inches at the Etihad Stadium.

Leaders Liverpool started the day unbeaten, seven points clear of their rivals, and were agonisingly close to taking the lead as John Stones stretched to clear the ball off the line. Instead, City went ahead through Sergio Aguero before Leroy Sane sealed victory with 18 minutes left to play.

It proved to be a pivotal moment as Liverpool ultimately finished one point behind Guardiola's team, missing out on the title despite amassing 97 points.

2019/20: Liverpool's emphatic home win was symbolic of a shift of power as they went on to claim their first Premier League title.

Klopp's side were 3-0 up after 51 minutes at Anfield and moved nine points ahead of fourth-placed City, eventually finishing 18 clear as they lifted the Trophy.

2020/21: The following season, the pendulum swung back the other way, with Man City stunning Liverpool at Anfield en route to reclaiming the title.

With the teams tied at 1-1 in the second half, City struck three times in 10 minutes to secure their 14th successive win and open up a 10-point lead over their hosts. It proved unassailable.

2021/22: Once again, the meeting between the teams earlier this season has proved to be reflective of the nip-and-tuck nature of the 2021/22 title race and indicative of the quality of both sides.

Nothing could separate the teams on the day and six months later they are only one point apart, heading into another duel that could decide who lifts the Trophy.

The best of the action from a dramatic afternoon at Anfield, with two fantastic Reds goals cancelled out by Manchester City: pic.twitter.com/b9iujWG5d5