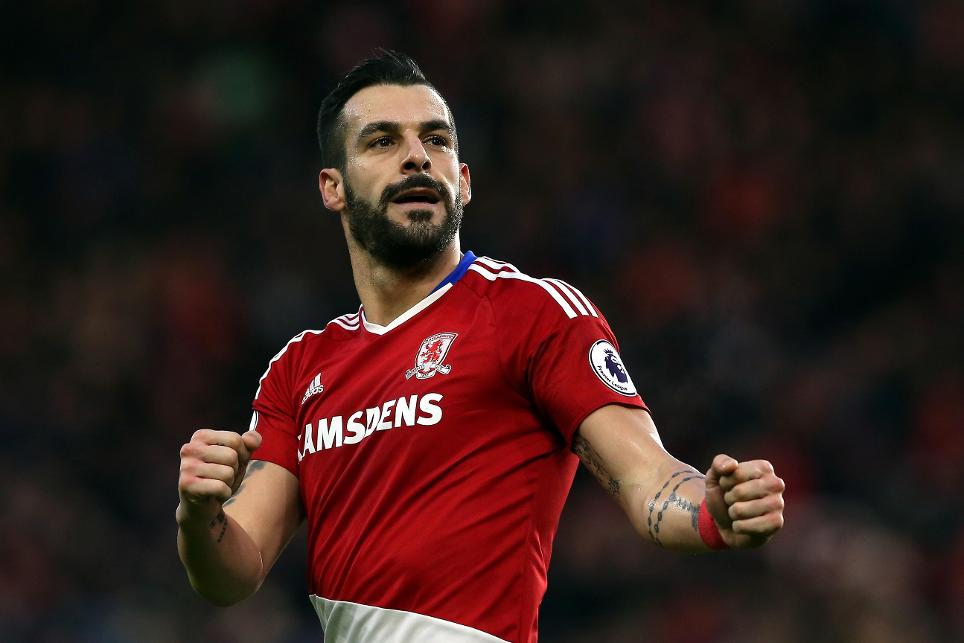 After four goals in as many matches, only one FPL forward has received more transfers in ahead of Gameweek 18

Fer: Let's play our way out of trouble External Link

Two first-half goals from Alvaro Negredo (£6.2m) helped Middlesbrough to a 3-0 victory over Swansea City and the Spaniard to a Fantasy Premier League Bonus Points System (BPS) score of 52.

Negredo collected maximum bonus points for the third time this season, with team-mates Ben Gibson (£4.8m), Adam Forshaw (£4.5m) and Marten de Roon (£4.3m) all rewarded with two bonus points each, tied on 29 in the BPS.

Gibson registered 15 clearances, blocks and interceptions (CBI) and won two tackles to help his side to a fifth clean sheet of the season.

Forshaw provided the assist for the second goal, converted by Negredo, and also won three tackles and completed 100% of his 36 passes.

Negredo topped the ICT Index with a score of 12.3 - his second-best total of the season.

His Threat tally of 38 was made up of four touches and two shots from inside the Swansea City penalty area.

But it was the visitors' Fernando Llorente (£6.3m) who registered the highest Threat score of 53, earning him 7.5 in the Index overall.

He produced five goal attempts, all of which arrived from outside the box.

With four goals in as many Gameweek starts, Negredo's recent ascent has boosted his claims for the third striker slot in FPL squads.

Middlesbrough face trips to Burnley and Manchester United next but, following that, Leicester City, West Ham United and West Bromwich Albion will all visit the Riverside Stadium.

Negredo is currently second only to Manchester United's Zlatan Ibrahimovic (£11.3m) for transfers-in among FPL forwards ahead of Gameweek 18 - more than 44,000 have swooped for the Spaniard.

Gibson, having picked up nine bonus points this season, appears the standout option.

George Friend's (£4.4m) return from injury clouds the situation at full-back, however.

He faces a battle to displace the impressive Fabio (£4.4m), who may even switch to right-back to challenge Antonio Barragan's (£4.6m) starting credentials.

Calum Chambers (£4.4m), who has featured in 11 of the last 12 Gameweeks, could offer the most secure value option.

In attack, both Llorente and Sigurdsson drew blanks away from home once again; the former is yet to score on his travels.

More than 135,000 FPL managers had acquired Llorente in the last two Gameweeks, with Sigurdsson now found in more than 435,000 squads.

Their owners will look to the meeting with West Ham, together with the Gameweek 19 visit of AFC Bournemouth, as an opportunity to deliver returns.