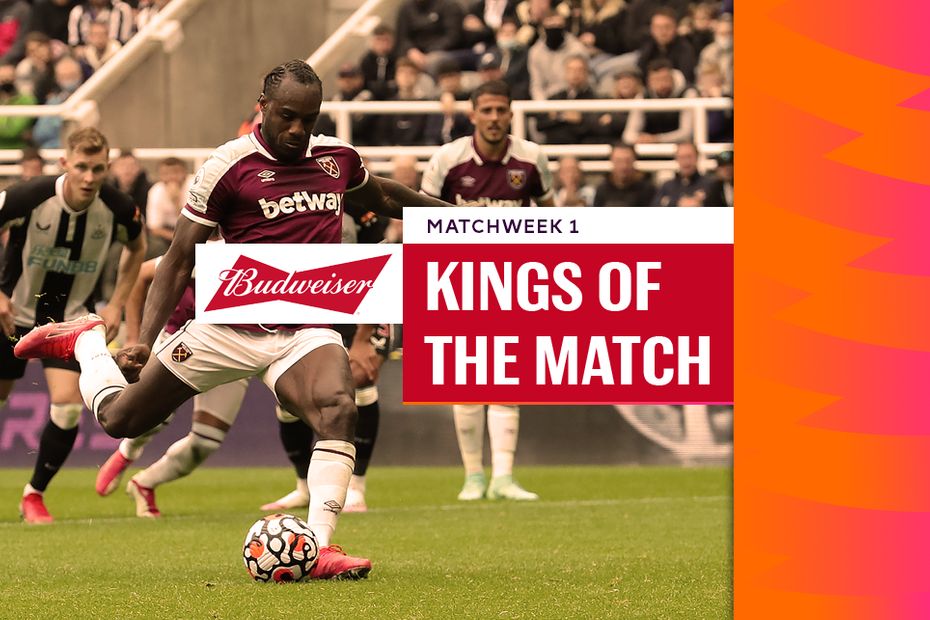 Michail Antonio: This West Ham United team always fights back External Link
GW1 Bonus points: Antonio and Benrahma lead the way
Shearer: Return of fans has made it an amazing start to season

After the final whistles in the opening Matchweek of 2021/22, thousands of supporters voted to crown their Budweiser Kings of the Match.

Fans across the world have had their say and chosen their top performers via the official Premier League website and app. Here's who came out on top.

The Spaniard became Brentford's first Premier League goalscorer and earned 44.1 per cent of the vote to win the accolade.

It was a stunning start to the season by Fernandes, who repeatedly ran in behind Leeds United's defence and scored a hat-trick. He gained two thirds of the vote.

Fine saves from the Brighton & Hove Albion goalkeeper helped his team come from behind to defeat Burnley.

A memorable debut for the centre-back, who marked his maiden Premier League appearance with his first Chelsea goal to seal a 3-0 win over Crystal Palace and gain 71.2 per cent of the vote.

The Brazilian scored Everton's equaliser at the start of the second half and set up his strike partner Dominic Calvert-Lewin for their third goal.

More than half of fans voted for the Leicester City goalkeeper, who made three saves to keep a clean sheet in the 1-0 victory over Wolverhampton Wanderers.

A goal and an assist on his Premier League debut helped the Watford forward edge out Emiliano Martinez with 30.4 per cent of the votes to the Aston Villa goalkeeper's 30.3 per cent.

The Egyptian was at his brilliant best, scoring one goal and creating two more in Liverpool's 3-0 win at Norwich City to claim a huge 91.2 per cent of the vote.

The Tottenham Hotspur star topped the poll with an overwhelming 69.3 per cent of the vote after netting a superb winner against Manchester City.