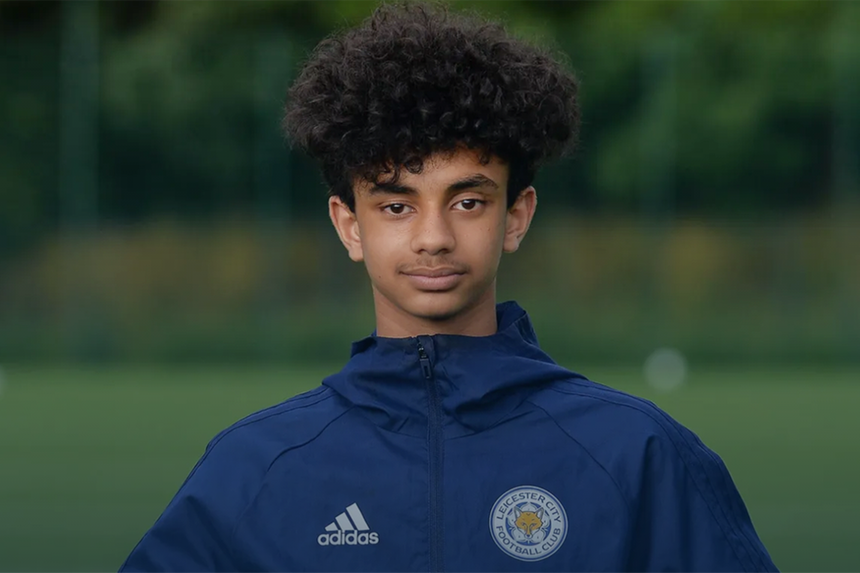 A love of football was what first directed Angel to the Premier League Kicks sessions run by his local club Leicester City last year before the pandemic struck.

"I didn't really have anyone to play football with so I started coming [to PL Kicks] and I got to know a lot of people," the teenager says. "It's amazing."

Since then, the programme and sessions have helped Angel make new friends and given him responsibility, as well as guidance on his future.

With the help of Jack Johnson, community engagement coach at Leicester City in the Community (LCitC), Angel has volunteered to referee the younger players when there are limited numbers in his age group.

"His attitude is impeccable," says Jack. "He is a role model for the young people to look up to here, to aspire to be like."

Making the transition from participant to referee, Angel is relishing the chance to meet even more people and continue his personal development.

"Jack teaches me new stuff and indicates me towards being good - he's helped me a lot,” says Angel.

"It’s really cool, the opportunities that they give us to meet new people."

Planning for the future

Such is the trust that has developed between Angel and LCitC coaches that he has sought them out for advice on what to do at college and his future career paths.

"He [Angel] said to me that he wanted a career in sport," Jack explains. "I think specifically he wanted to look at being a physio, but he's always asking questions to us: 'How do I go about it?', 'How I might get into it?'

"Me, along with the other coaches, Pat and Ilwad, helped to answer those questions and any queries he might have and can push him along in the right direction."