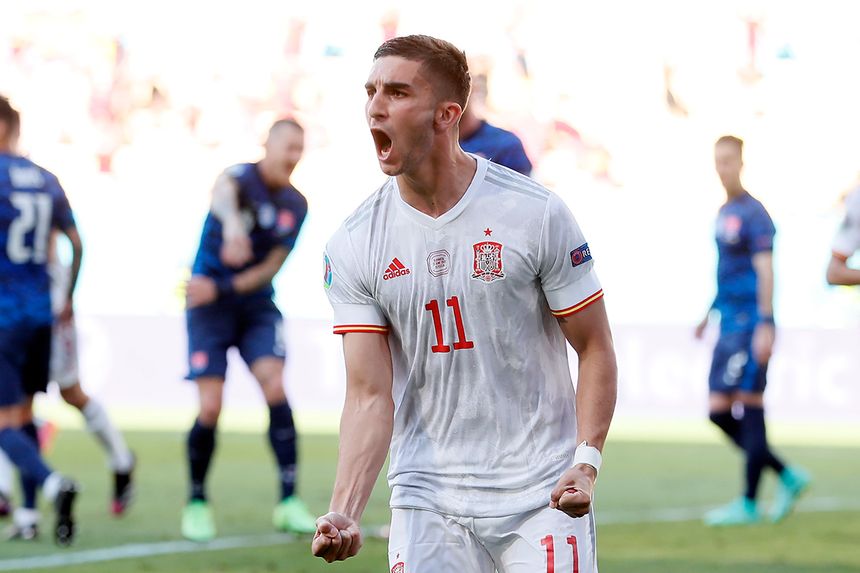 Manchester City's Aymeric Laporte and Ferran Torres scored as Spain triumphed 5-0 against Slovakia to reach UEFA Euro 2020's round of 16.

The UEFA Euro 2012 champions were initially frustrated as Newcastle United goalkeeper Martin Dubravka saved a penalty by former Chelsea striker Alvaro Morata, but Slovakia's No 1 then scored an own goal as he failed to turn a looping ball over his crossbar with 30 minutes gone.

Laporte made it 2-0 with a header, while the centre-back's Man City team-mate Torres added a fourth with a clever flick within a minute of his introduction as a substitute.

Spain secured second spot in Group E and a meeting with Chelsea midfielder Mateo Kovacic's Croatia in the last 16 on 28 June.

A great night for our lads as both @Laporte and @FerranTorres20 bagged a goal as #ESP sealed a 5-0 win over #SVK to progress through to the last 16! 👏

Chelsea attacker Kai Havertz netted his second goal of UEFA Euro 2020 as Germany twice fought back to draw 2-2 against Hungary.

Starting alongside Blues team-mate Antonio Rudiger and Man City's Ilkay Gundogan, Havertz headed in from close range to make it 1-1 for the 2014 FIFA World Cup winners.

Germany secured second place in Group F with their draw, meaning they will take on a host of Premier League stars as they meet Group D winners England at Wembley Stadium on 29 June.

Manchester United midfielder Paul Pogba provided an assist for Karim Benzema as France drew 2-2 with Portugal in a battle of the 2018 FIFA World Cup and UEFA Euro 2016 champions.

Pogba's pinpoint pass teed up France's second goal as the point earned them top spot in Group F and a knockout tie against Switzerland on 28 June.

Portugal did enough to claim a last 16 place as one of the four best third-place finishers, with a superb save from Wolverhampton Wanderers goalkeeper Rui Patricio denying Pogba a winning goal.

The holders will meet Belgium in the last 16, with Portugal's Ruben Dias coming up against his Man City colleague Kevin De Bruyne as a combined total of 18 Premier League players fill their UEFA Euro 2020 squads.