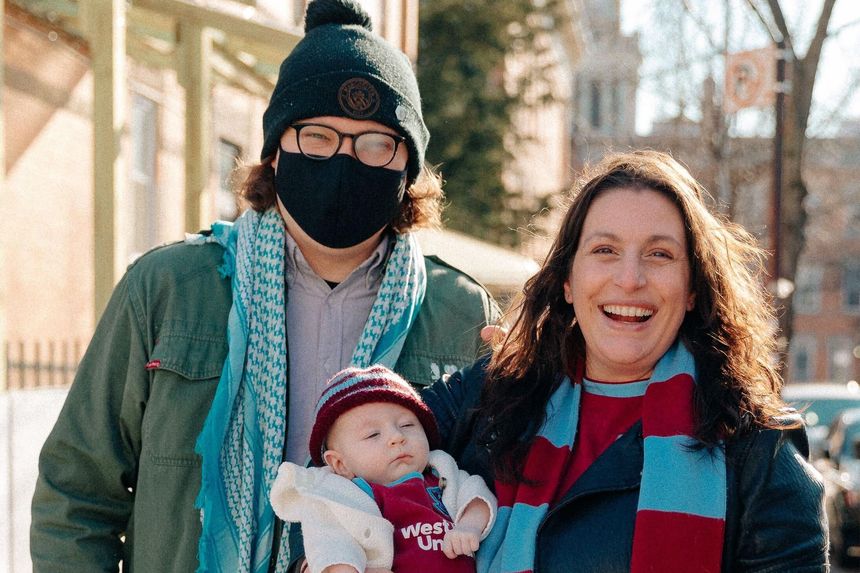 Meet Meghan, a West Ham United supporter and mother in New York, raising her daughter to be a Premier League fan for life.

"Back in the late 90s and early 2000s, around the Sir Alex Ferguson times, the only soccer you could watch on TV where I grew up was Manchester United. Everybody was becoming a fan, but I'm watching and something just wasn't sitting right with me.

"Being from Western New York, we like an underdog. So I went to find myself a mid-to-lower-table team to cheer for, and I happened to pick West Ham.

"In my adulthood, this sport has given me everything. I met my husband watching a New York City FC game at Yankee Stadium and our weekends are centred around the Premier League - although he's a Manchester City supporter - but without him, we wouldn’t have my daughter.

"When we got married, we actually had our own crest made that merges together our names, the Hammers, and the Blue Moon.

"My daughter was born on November 27 and now we have the ability to watch every weekend with her.

"Every Saturday or Sunday morning, we get up as a family, we have our coffee, I have my '#1 Mom' mug from West Ham, and we have flags for our clubs that we hang on the fire escape.

"It’s a whole ritual. Depending on who’s playing, we dress our daughter up in the appropriate kit until she can make her own decisions. But I think she looks happier in her West Ham gear!

"Since she was born, City have been undefeated, so my husband thinks she’s their good-luck charm, but I think she’s been good luck for both sides. She’s just three months old, so she’s not paying much attention, but she’s listening.

"We're going to get her as exposed as possible, and just let her know that from the jump our family will be united as we can be supporting different teams on the weekends. She’ll never know a weekend without it.

"Having been pregnant and given birth during the pandemic in New York, I can't wait for that first Premier League morning when all three of us can get on the train, head to the city, go to the pub, and have a full English breakfast there with our crew of friends that has become our family here.

"They can be a part of that with her and help raise her up as a diehard."