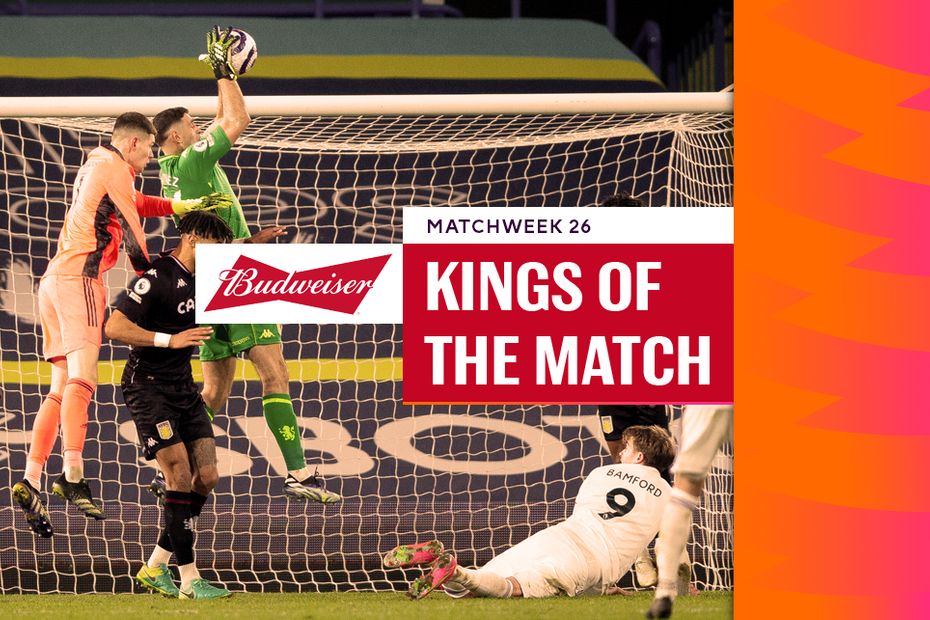 See which players earned the backing of supporters, including Aston Villa's Emiliano Martinez

Supporters have voted in their thousands to crown their Budweiser Kings of the Match in Matchweek 26.

The defender picked up almost half of the vote, thanks to his third goal of the season as Manchester City recorded a 14th consecutive Premier League win.

West Bromwich Albion's goalkeeper made six saves and kept a clean sheet as his side secured an important victory against relegation rivals Brighton & Hove Albion.

Aston Villa's goalkeeper kept his 13th Premier League clean sheet of the season, polling 67.8 per cent of the vote.

Neto, who was voted for by 41.4 per cent of fans, provided the cross from which Ruben Neves equalised and secured a point for Wolverhampton Wanderers.

Fulham's goalkeeper kept a clean sheet as he frustrated Crystal Palace, helping his side extend their unbeaten PL run to five matches.

The Ivory Coast international scored Arsenal's third goal at Leicester City and received 49.1 per cent of the vote.

The Tottenham Hotspur winger topped the poll, with 55.3 per cent of the vote, after he provided two assists for Gareth Bale.

The left-back earned the accolade after a solid defensive display at Stamford Bridge.

Liverpool's 20-year-old midfielder won the vote after breaking the deadlock in a 2-0 win at Sheffield United.

The Everton forward picked up 46 per cent of the vote after scoring for the third successive league match to boost his side's top-four hopes.

A late goal for the lively Algerian helped Man City to a 15th consecutive league victory.

Burnley's goalkeeper made several impressive saves to help his side earn a point with Leicester City, edging visiting goalkeeper Kasper Schmeichel to win the vote.

The Sheffield United striker picked up 40.9 per cent of the vote after scoring the decisive goal against Aston Villa.

For the second successive match, the Manchester United left-back has earned the vote after yet another solid display.

The Tottenham Hotspur captain made three crucial saves to keep Fulham at bay and claim almost 50 per cent of the vote.

The Everton forward became the first Brazilian to score in four consecutive Premier League matches with the winner that lifted the Toffees to fifth place and won him the vote for the second time in a week.

A tour de force from the Chelsea midfielder was crowned by a match-winning goal at Anfield and reflected by his claiming two-thirds of the vote.