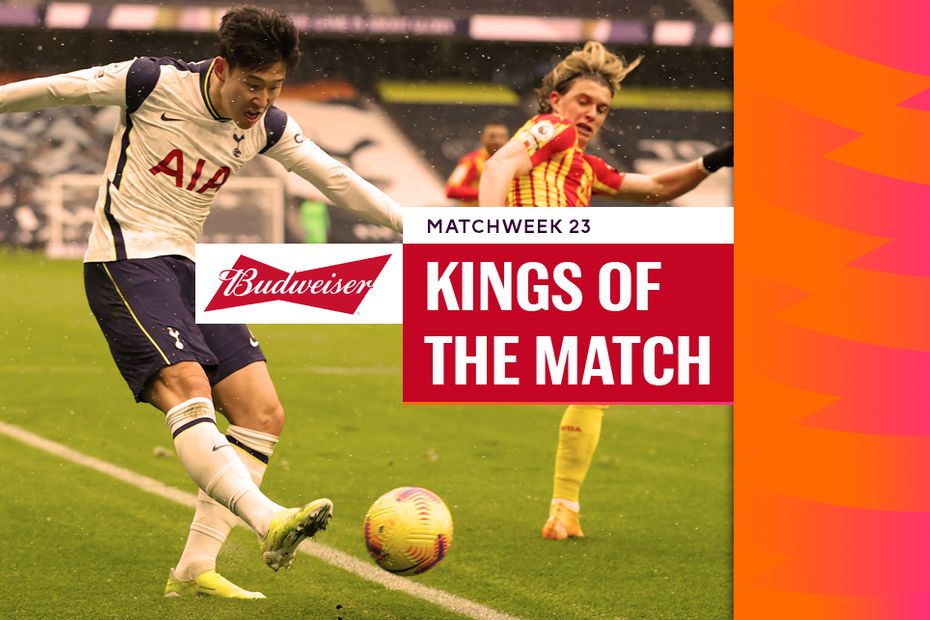 See which players earned the backing of supporters, including Spurs' Son Heung-min

Sonny: “We stuck together, that’s most important” External Link
What we learned in Matchweek 23
Best photos of Matchweek 23

Supporters have voted in their thousands to crown their Budweiser Kings of the Match in Matchweek 23.

The striker scored his fourth goal in five Premier League matches, and his 10th of the season, as Aston Villa completed the double over Arsenal.

The Paraguayan scored a first-half double and then worked tirelessly to help Newcastle United defend their lead with nine men.

Cresswell was defensively solid and threatened in attack as West Ham United recorded a fifth straight away league match without defeat.

In a six-goal thriller, the Portuguese's strike was the pick of the bunch as he whipped the ball over goalkeeper Robin Olsen and into the top-left corner from outside the box.

Son returned to form with his first goal in six matches, finishing off a counter-attack and taking a huge 80.3 per cent of supporters' votes.

The full-back brilliantly blocked an Adama Traore shot and combined his defensive duties with some enterprising play going forward.

The German atoned for his penalty miss with two goals as Manchester City triumphed at the home of the champions and secured a 14th straight win in all competitions.

He used his pace and movement to great effect, running in behind to set up Mason Mount's opener before winning the penalty that gave Chelsea their decisive goal.

Nearly three-quarters of the vote went to Bamford after his 12th PL goal of the season helped Leeds United to a third win in four matches.