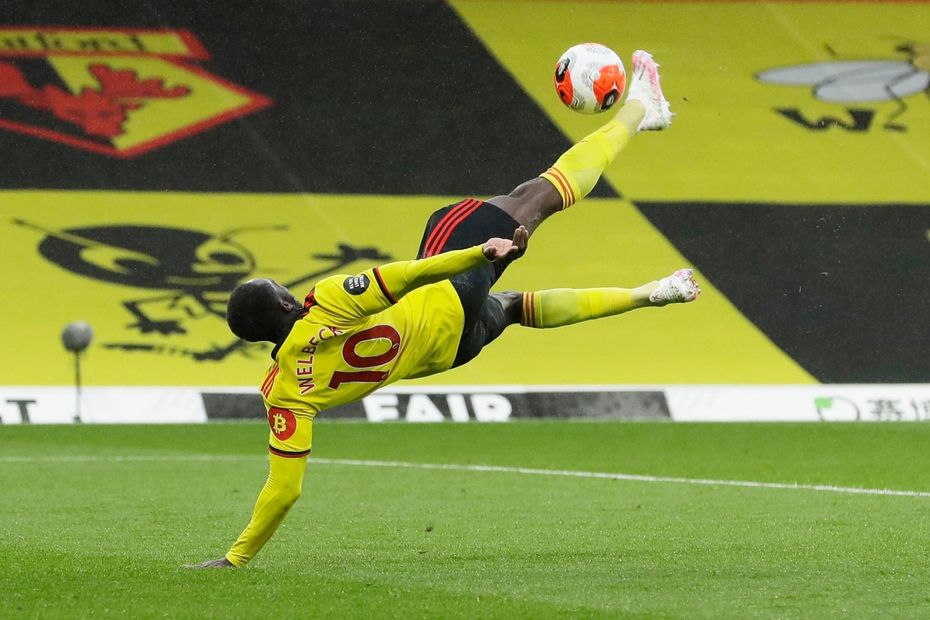 Danny Welbeck’s switch from the centre to Watford’s left flank can play a part in helping them preserve their Premier League status.

Injuries have restricted the England international to just five starts this term, but when used by the Hornets it has been primarily as a centre-forward.

His excellent display against Norwich City, crowned by a stunning bicycle kick winner, was a reminder of what he can offer out wide.

Surprisingly Welbeck had not started on the left in a 2019/20 Premier League match prior to Tuesday’s much-needed victory.

Throughout his career the 29-year-old has shone in that position, offering drive, dynamism and a diligent work-rate.

Without the ball he does a terrific job, and Welbeck’s height inside both boxes is also an asset.

Two of his three efforts on goal at home to Norwich were headers, adding another dimension to Watford's attacking threat.

The Hornets did not have a clear style of play this season until Nigel Pearson’s arrival in December.

The current head coach has since deployed a consistent 4-2-3-1 with his team identifiable as a counter-attacking team.

Since the campaign resumed they have enjoyed less than 50 per cent possession in every match, averaging just 39.4.

Welbeck is better suited to this identity than players who had previously been selected ahead of him.

In the continued absence of Gerard Deulofeu, the inclusion of Roberto Pereyra or Tom Cleverley on the left of midfield gave Watford a lack of balance.

Neither is quick or direct in their running, unlike Ismaila Sarr down the other wing.

Fielding Welbeck and Sarr in tandem out wide, two players who love to make runs in behind opposition full-backs, is ideal for the way Watford choose to attack.

This was evident in that 2-1 midweek success.

In their 2-2 draw with West Ham United, Jarrod Bowen ran in behind left-back Javier Manquillo to assist a Michail Antonio goal.

And using Sarr and Welbeck to hurt them in a similar way is bound to form part of Pearson’s game plan for Saturday’s encounter.

He likes to drop into pockets to hold the ball up, and the vertical runs of two quick wingers either side of him should in theory complement his game perfectly.

It has taken a while for Watford to find the right role for the ex-Arsenal and Manchester United man, but starting him as a wide-left forward could prove to be a turning point.

When you consider Abdoulaye Doucoure occupies the No 10 role, the Hornets now have one of the most powerful attacking midfield units in the competition.

If this trio develop a good understanding over the coming weeks it will provide a major boost to their hopes of staying in the Premier League.