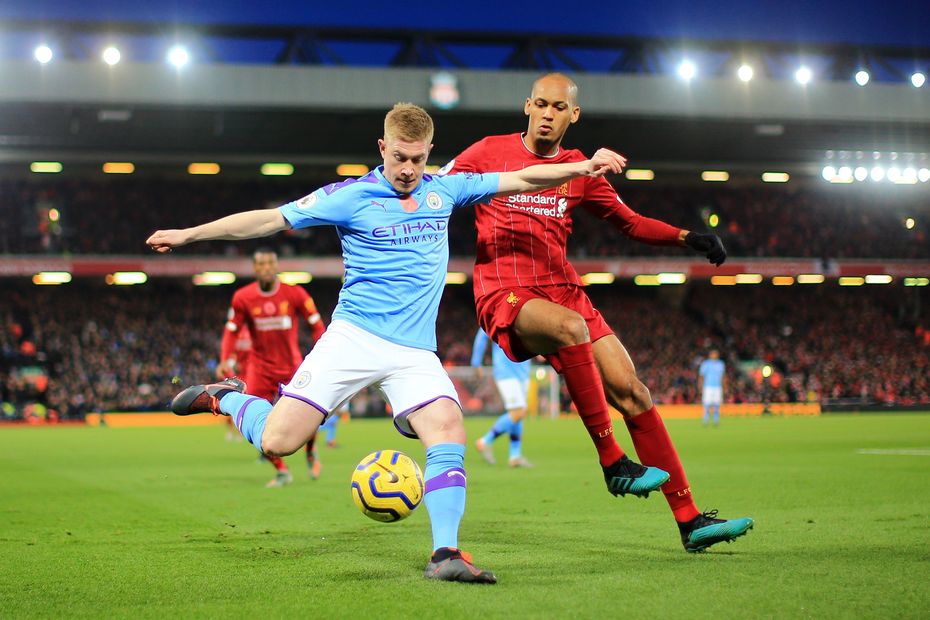 Guardiola: Liverpool challenge is one we will relish External Link

To beat Liverpool you need togetherness, a dogged attitude and potency in the final third.

These are qualities Watford displayed in abundance when inflicting the champions’ only Premier League defeat of 2019/20, while Atletico Madrid and Chelsea have showed the same attributes in cup wins over the Reds.

Manchester City would prefer to outplay their title successors with a dominant possession-based performance on Thursday, but their chances of success would probably be increased if they alter their usual approach.

Man City’s 2-1 loss at Chelsea last time out was a reminder of how vulnerable Pep Guardiola’s side can be to swift counter-attacks.

With just one defensive-minded central midfielder in place, two adventurous full-backs and a constantly changing centre-back partnership, they lack a solid platform behind their array of attacking talent.

City’s exposure on the break has been a running theme and they have conceded at least twice in all eight of their league defeats.

Liverpool, meanwhile, are lethal on the counter-attack.

City may ideally like to monopolise possession, but the teams that cause Liverpool most problems are those who are compact and commit to attacking transitions.

If the Reds' strikers are denied space to run into, the team become more reliant on their attacking full-backs for creativity.

This can leave holes at the back, and the likes of Raheem Sterling and Riyad Mahrez are built to capitalise on such scenarios.

Guardiola’s side have shown before that they can play in such a style.

In last season’s 2-1 home win over Liverpool, they had 49.6 per cent possession. And earlier this season they beat Chelsea 2-1 at the Etihad with just 46.7 per cent of the ball.

To succeed with such an approach, City must ensure they create turnovers of their own, but this season there has been a dip in their defensive aggression.

Their pressing has been more subdued and they are sorely missing Fernandinho’s hostile approach in central midfield.

While Liverpool have improved their ball-winning superiority in the middle third, Man City have dropped from second to 11th place in the top-flight rankings.

To avenge November’s 3-1 loss at Anfield, City must rediscover the tenacity off the ball that is synonymous with their most successful times.

If they can regularly break up play in central areas and counter-press well, Guardiola’s men have the attacking talent to hurt Liverpool from turnovers.

Starting Bernardo Silva as a false nine at Stamford Bridge backfired so, in Sergio Aguero's continued absence, I would expect Guardiola to start with Gabriel Jesus this time.

The Brazilian is not as clinical as his fellow striker. He has a 16.1 per cent conversion rate and averages a goal every 149 minutes, compared to Aguero’s 29.6 per cent and strike every 91 minutes.

Nonetheless, Jesus’s all-round game is still strong. He holds the ball up well, is equally dangerous in the air as on the ground, and his movement around the box is outstanding.

With his clever runs and natural eye for where chances will fall, Jesus is actually the striker who gets the most opportunities inside the box in the division.

Averaging four shots per match from inside the area, he tests goalkeepers more often than anyone else.

He is an adaptable goalscorer too, finding the net with two headers and four left and right-footed shots apiece.

If Man City get their game plan right at Etihad Stadium and Jesus is feeling sharp, he can be their matchwinner.