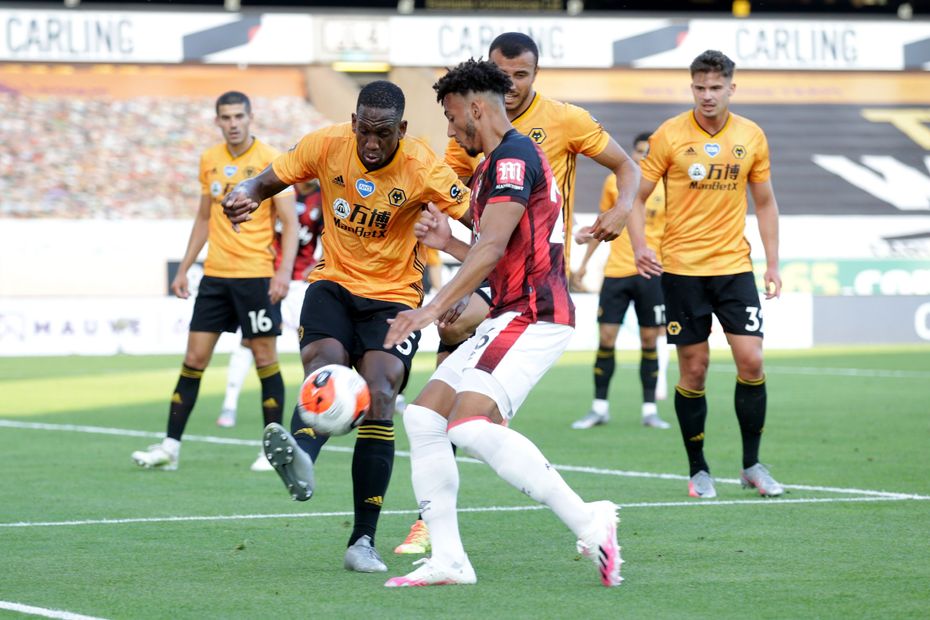 Adrian Clarke says the back three of Willy Boly, Conor Coady and Romain Saiss are just as important to Wolves' success as their forwards

Adrian Clarke looks at key tactical points ahead of Matchweek 32.

The performances of Adama Traore and Raul Jimenez have attracted plenty of attention ahead of Wolverhampton Wanderers’ visit to Aston Villa on Saturday, but their defenders also deserve praise.

Between them those two opponents only managed two shots on target in total.

Saiss has dropped back from a central midfield position this season to help form this very tight-knit defensive unit.

Playing to the left of captain Coady, the 30-year-old Moroccan has been a model of consistency in this alternative role.

Saiss is powerful in the air, winning more aerial duels than any team-mate, and is also someone the head coach can rely on to supply aggression and commitment.

Sometimes his combativeness can be excessive, as shown by his nine yellow cards this season, but in general Saiss's qualities complement those around him extremely well.

Boly’s return from injury has made a tremendous difference to Wolves’ defensive security but he alone is not responsible for the way they protect goalkeeper Rui Patricio.

The three are measured in their combined approach, with poor decisions few and far between, giving a unit that Nuno can depend on.

Keeping eight clean sheets from 11 Premier League outings together in 2019/20, conceding only six goals, they have proven to be incredibly difficult to break down.

Villa’s attacking players will need to be at their sharpest to create openings at Villa Park on Saturday.

If Dean Smith’s side are to claim three valuable points in this West Midlands derby, you suspect they will need to produce a very bright start.

Wolves are slow-starters and are at their most vulnerable before half-time.

The team placed sixth in the table actually sit bottom of the "half-time table" on just 26 points, with a minus-11 goal difference.

From the 45th minute onwards, Wolves are a completely different animal.

Patient in their approach but also able to switch effortlessly between a 3-5-2 and 3-4-3 when substitutes are introduced, Wolves maintain a serious goal threat for the entire 90 minutes, but especially when their opponents tire.

When they do and space opens up, their forward players such as Traore, Diogo Jota and Pedro Neto can expertly exploit those situations.

From the half-time break, Wolves boast a formidable +21 goal difference, "losing" only one second half this season.

The longer matches go on, the tighter Wolves become at the back.

Inside the final 30 minutes, traditionally a period when plenty of goals are scored, Nuno’s defence has been breached only five times all season.

Between the 60th and 74th minutes they are yet to concede a single goal.

Their astute Portuguese head coach has built a robust side who get stronger when others begin to tire.

With Wolves conceding just four second-half goals away from home all season, Villa will know their best chance of success is to catch their opponents off guard in the early stages on Saturday afternoon.