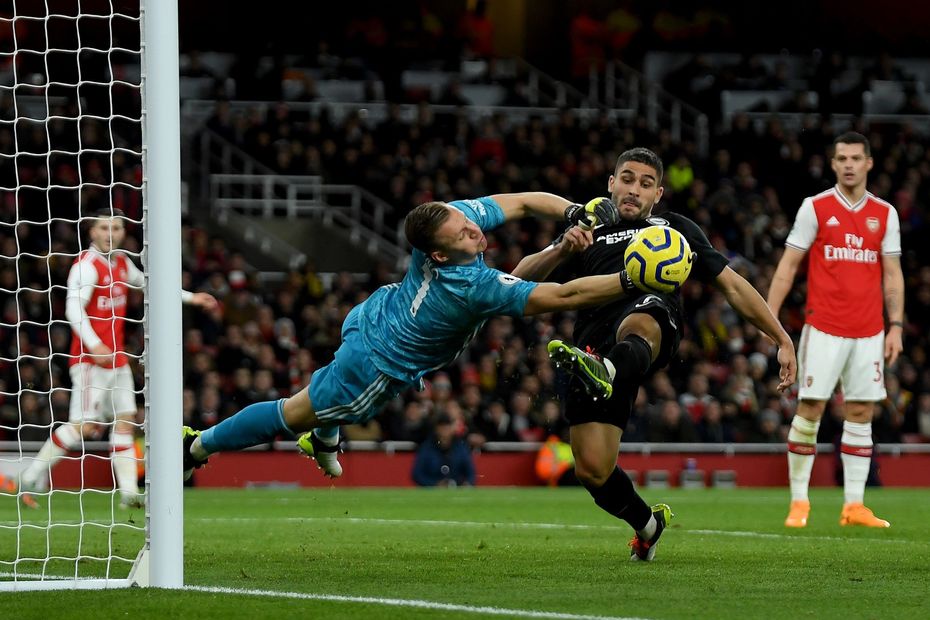 As Arsenal travel to Man City, Adrian Clarke explains how their No 1 has developed into one of the league's best goalkeepers

‘Guardiola has had an enormous influence on me’ External Link

Adrian Clarke is looking at key tactical talking points ahead of Matchweek 30.

Bernd Leno has been a model of consistency for Arsenal this season.

As a goalkeeper, it is vital to have a strong understanding with the defenders in front of you.

But Leno has been forced to contend with an ever-changing group of players in the Gunners' backline.

In 28 Premier League matches, the German has played behind 17 different defensive combinations.

The same back four have not been used on more than five occasions, while only three defenders have appeared together in more than two Premier League fixtures.

When you consider Leno has started alongside four left-backs, four right-backs and six different centre-backs, his performances have been extremely impressive.

Pulling out all the stops

Following on from a solid debut campaign in 2018/19, the 28-year-old has proved highly dependable when called upon.

He is likely to be kept just as busy when the Gunners visit Manchester City on Wednesday.

During their last visit to Etihad Stadium, Leno made an incredible nine stops from 12 efforts on target, with the hosts winning 3-1.

Pep Guardiola’s side also beat Arsenal at Emirates Stadium in December, triumphing 3-0 after taking 14 shots to the hosts' six.

Leno's brilliant save against City

But Arsenal have improved considerably since the arrival of Mikel Arteta.

They were unbeaten in eight league matches when the season was halted, conceding just six times and acquiring 16 points, the same as Man City.

Leno has emerged as a pivotal figure in the Gunners' renaissance with his numbers among the very best in the competition.

Only Newcastle United's Martin Dubvraka has made more saves this season, while only Alisson, Hugo Lloris, Vicente Guaita and Dean Henderson have better save ratios.

Leno has noticeably improved his error count this season.

Last term he made five mistakes leading to a goal, the joint-highest total in the competition. But in 2019/20 he has made just two.

Furthermore, his seven clean sheets are already more than the six he managed in 2018/19.

Leno is also quicker and more commanding when coming off his line in general play.

Last season he ranked 18th for the most high claims from crosses, with 10. But he is joint-fifth this time around with 17.

He is clearing up danger outside his box more effectively too.

Leno has leapt from ninth in last season’s "sweeper goalkeeper clearances" rankings to joint-second, making 14 of them.

Against Man City, Arsenal's last line of defence will no doubt have his credentials seriously tested.

But with his sharp reflexes and heroic displays to date, Leno is a goalkeeper Arteta knows he can trust.

Part 1: Fleck influence can be the difference against Villa