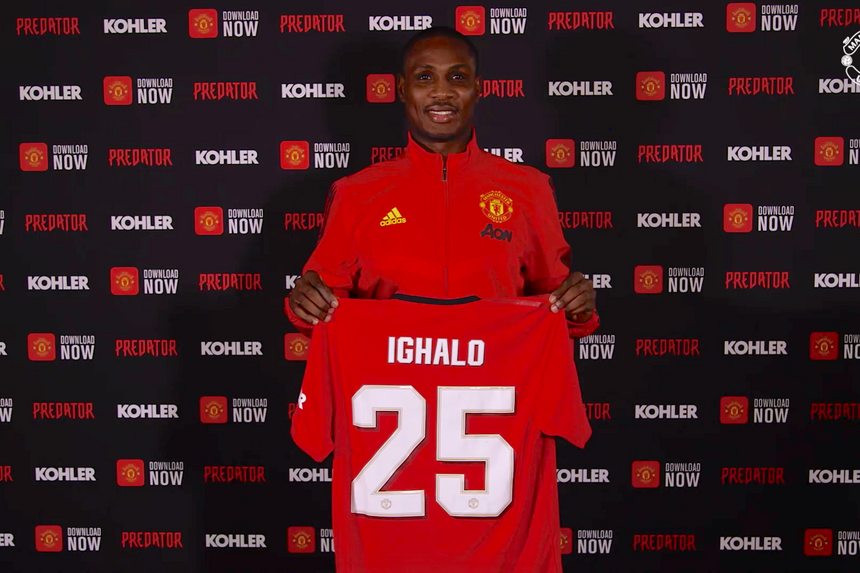 Odion Ighalo says it is a dream come true to join his boyhood club Manchester United, and that he is proud to be the first Nigerian to play for the 13-time Premier League champions.

He returns to the Premier League after scoring 16 goals in 55 Premier League appearances for Watford between August 2015 and January 2017, and could make his Man Utd debut at Chelsea.

"When we were young back in Nigeria we used to watch the Premier League on TV a lot, when the likes of Andy Cole used to play," Ighalo told Man Utd's official website.

"People support Man Utd a lot back there in Nigeria so I developed that love, because all of my siblings, they are Man Utd fans.

"I never thought this was going to happen, but dreams do come true, so I'm very happy to be here and this is going to be a big and good challenge for me in my career.

"I'm really proud. I know that this is very big. You're going to be the first Nigerian to play for United. It's a good record for you in your career.

"It was crazy because, all over the news for the last few days, is about my deal to Man Utd. Even the street I grew up on, they are doing parties, celebrating Ighalo signing for United. They sent me the video.

"Some of them are supporting some other teams in the Premier League. But they said, because of me, they are moving to United."

Having followed the fortunes of Ole Gunnar Solskjaer's side with interest, Ighalo is confident his qualities will benefit the team.

"They have a striker that stays mostly in the middle, but [Anthony] Martial likes to come from the side, even [Marcus] Rashford and all that, so you need someone in the middle that can keep the ball, hold the ball, because I've watched so many United games," said Ighalo.

"So they need a physicality there up front to keep the ball, to give and to make some movement, which I believe, if everything goes well, I can add to the team."

See: Ighalo: Why I chose the No 25 shirt