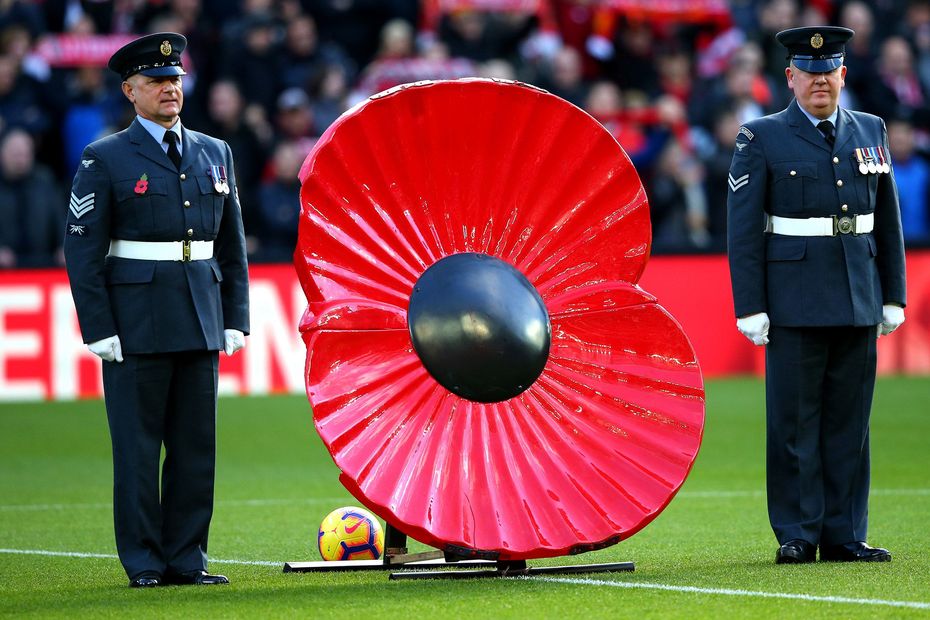 Stadiums in the Premier League will fall silent this weekend and poppies will be worn as clubs and their fans pay their respects to the sacrifices made by the Armed Forces community, past and present.

As well as the minute's silence taking place before Premier League fixtures over Matchweeks 11 and 12 ahead of Remembrance Weekend, various tributes before kick-off are planned by the clubs.

Among the numerous activities taking place this weekend, fans at AFC Bournemouth's home match against Manchester United will see both team captains carry floral wreaths on to the field, which will be collected by servicemen and women and placed in the centre circle at Vitality Stadium. Members of the Royal Signals will be flagbearers for the match, while a bugler will play The Last Post.

At Villa Park there will be fun zone activity with the Armed Forces, while 10 military personnel will be welcomed by a guard of honour made by Aston Villa and Liverpool's players prior to kick-off, with a special flag display organised by fan group ProjectB6.

A poppy banner will adorn the centre circle at Etihad Stadium, where the poem "Ode to Remembrance" will be read out by the club chaplain as the reigning Premier League champions prepare to host Southampton.

After a rendition of The Last Post, the Manchester City Veterans football team will be welcomed on to the pitch, having marched to the stadium to raise money for City in the Community.

As in previous years, players will be wearing special-edition shirts featuring embroidered poppies.

The match-worn shirts will then be signed and made available for purchase in an auction after the match, with all proceeds going to The Royal British Legion.

The Premier League has been supporting the Legion since 2012 and, through the auctioning of these match-worn shirts, has helped to raised £1.6million for the charity.

This money will help the Legion offer support in many ways including providing crisis grants, lobbying the government on issues that affect the Armed Forces community, providing sport and art-based recovery programmes and advising on benefits and money problems.

"We are extremely grateful for the support the Premier League clubs and the football community show the Poppy Appeal every year," said Claire Rowcliffe, director of fundraising at The Royal British Legion.

"The Legion’s work is entirely dependent on the public’s generous support – so please wear your poppy with pride, knowing you have made a real difference to the lives of servicemen and women, veterans and their loved ones."