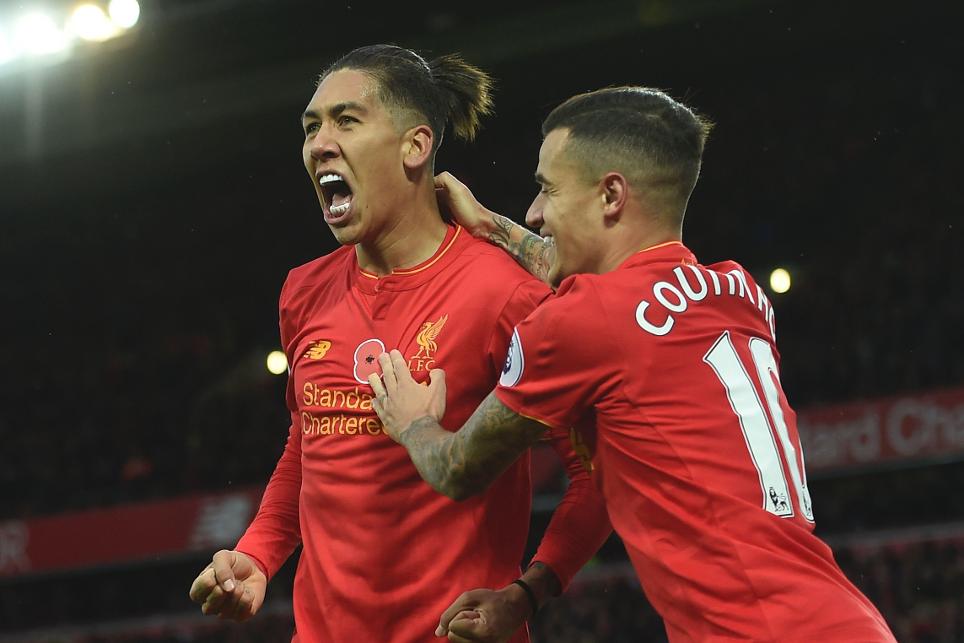 The most popular player in Fantasy Premier League, Coutinho has delivered double-figure hauls in three of his last four appearances at Anfield.

Firmino sits in 18.1% of FPL squads compared with Coutinho’s 46.7%, yet he has mirrored his team-mate's average of 6.4 points per match this season.

Mane, meanwhile, has produced at least 10 points on three occasions at home – five of his six goals have arrived at Anfield.

Of the three, Firmino leads the way for penalty area attempts in home matches with 15, with Mane registerring 10 and Coutinho just eight.

David Moyes's men have conceded 56 efforts inside the box in the last four Gameweeks, more than any other side.

The early kick-off at Burnley affords Sergio Aguero's (£13.2m) 46.2% owners reason for optimism, should he overcome injury concerns to feature for Pep Guardiola's side.

Manchester City's striker has scored twice in three of his five away appearances in the Premier League, though has struggled for form of late, netting just three times over City's last 11 matches in all competitions.

The Clarets have been resilient at home, conceding just six times in seven Turf Moor matches, but if Aguero shakes off a problem with his foot Sean Dyche's defence could face a stern test.

Back in contention after serving a one-match suspension, Zlatan Ibrahimovic (£11.1m) has the chance to reward his remaining 25% owners.

Having scored twice against Swansea City in his previous Premier League match, the Manchester United forward faces a West Ham United side who have shipped 14 goals in six away trips.

Ibrahimovic has fired 21 attempts on goal over his last four matches, more than any other player.

Sitting in 22% of FPL squads, Alexis Sanchez (£11.3m) will be hoping to profit from Arsenal's home meeting with AFC Bournemouth.

But the Chilean has scored just one of his six Premier League goals at Emirates Stadium this season and was moved to the right flank against Paris Saint-Germain in midweek.

Hazard has scored in all but one of his six home appearances under Antonio Conte and Costa has proven the most consistent FPL performer of the campaign, delivering points in 10 of the opening 12 Gameweeks.

Spurs striker Harry Kane (£10.8m) has hit the target four times in three outings across all competitions but faces a tough task to penetrate resilient opponents who have earned six successive shutouts.

FPL managers looking for a differential should consider Swansea City's Gylfi Sigurdsson (£7.2m) for a home meeting with Crystal Palace.

Sitting in just 3.6% of squads, the playmaker has produced points in four of five appearances under new manager Bob Bradley.

Assigned both dead-ball duties and penalties, Sigurdsson faces the only side yet to keep a clean sheet over the first 12 Gameweeks.