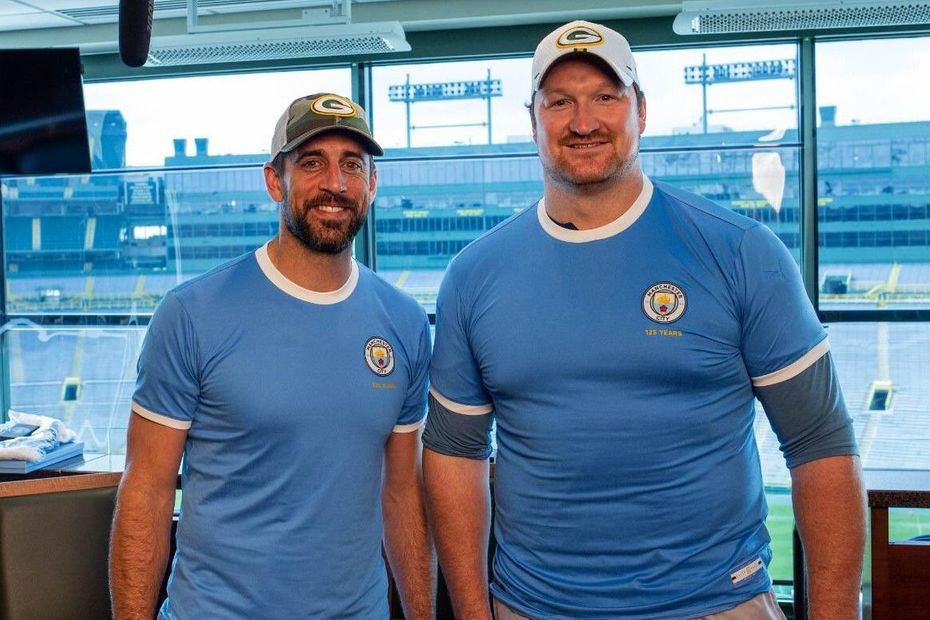 You would think that two of the biggest stars of the NFL have enough on their plate as they practice and perfect hundreds of plays in the hope of becoming Super Bowl Champions.

But go inside the locker room of the Green Bay Packers and timesheets and playbooks are not the only things you will find.

At Lambeau Field there is also a place for the Premier League.

Decorated upon the walls is the Premier League table which offensive guard and die-hard Manchester City fan Bryan Bulaga ensures is updated every weekend.

"It was about five, six years ago, down in Florida, just waking up early for a round of golf," Bulaga explains to Man City's Arielle Castillo.

Great Match Week 3 In the @premierleague . Thanks @weirnateatc for making sure the table is up to date at @LambeauField . @MenInBlazers @NBCSportsSoccer what do you guys think of the the table? Pretty professional job if you ask me! #ComeOnCity #ManchesterIsBlue pic.twitter.com/MaVTs3JO2E

"I was up before my wife, went down to just eat something. Turned on the TV, and City was on, and it was really one of the first soccer games I've ever watched fully.

"I just fell in love with it since that day - been following them, and supporting them, and just trying to grow my knowledge of the game more and more."

And Bulaga is not alone in Wisconsin.

Perhaps one of City's most famous supporters is quarterback and Super Bowl XLV MVP Aaron Rodgers, who has been watching his other beloved "football" since he first entered the NFL.

"I've been a fan of soccer for a long time," he tells Castillo. "I used to watch [the] Premier League on an old English soccer channel for years.

"My old roommate when I was a first, second-year player who works here, he's a die-hard soccer fan, so in our squabbles over who got to watch what on TV, a lot of times we were watching soccer."

"The way he speaks to the team, it’s discipline, but encouraging style. I just really related to that type of leadership and appreciated it."

Rodgers also revealed the impact Pep Guardiola had on him watching out for City's results.

Watching Amazon's "All or Nothing", which chronicled the behind-the-scenes of their record-setting 2017/18 100-point season, Rodgers saw lots of qualities in Man City's manager that he himself aspires to.

"It gave me an even greater appreciation and devotion to City," he added.

"Just really appreciating the way Pep went about his business - the way he speaks to the team, it's discipline, but encouraging style. I just really related to that type of leadership and appreciated it."

Rodgers and Bulaga linked up ahead of Man City's celebration of their 125th anniversary over the weekend, which proved to be a happy one for the Packers pair.

They watched City secure their biggest-ever Premier League win, beating Watford 8-0 on Saturday, before shifting their focus towards their game on the gridiron and beating the Denver Broncos 27-16 to stay unbeaten at the top of the NFC North.

This week they played the Philadelphia Eagles on Thursday, leaving their Saturday free to kick back and watch City's trip to Everton.

What makes an anniversary celebration even better?