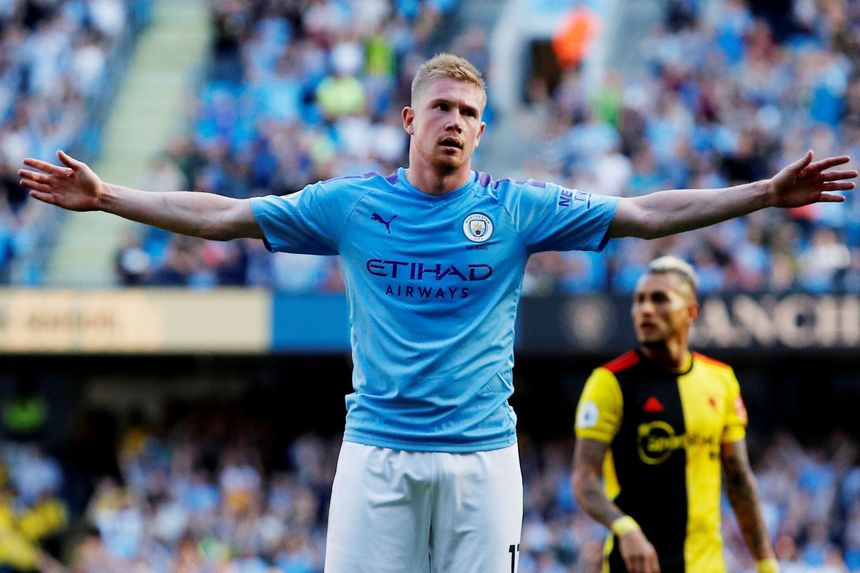 A goal and two assists against Watford lifted Kevin De Bruyne (£9.9m) to the top of the midfield standings in Fantasy Premier League.

The Belgian also earned maximum bonus, returning 17 points in an 8-0 win over the Hornets at the Etihad Stadium.

He has produced 41 of his 54 points in home matches.

De Bruyne was one of five Man City players to record double-figure hauls.

Bernardo Silva (£7.8m) is currently the top-scoring player for Gameweek 6.

He got three goals and 19 points, while fellow midfielders Riyad Mahrez (£8.5m) and David Silva (£7.5m) recorded 15 and 11 points respectively.

Centre-back Nicolas Otamendi (£5.4m) delivered a goal, an assist and a clean sheet for 15 points. His owners will have been happy to see him last until just after the 60-minute mark before being substituted.

The Man City forward produced a goal and an assist and is narrowly ahead of De Bruyne on 55 points.

The winger was the most-selected captain for Gameweek 6, handed the armband by 1.4million managers.

But Sterling was an unused substitute and has now claimed just five points in the last three Gameweeks.

Maddison picked up 10 points after scoring the winner in Leicester City’s 2-1 home win over Tottenham Hotspur.

Wood provided his first attacking returns with both goals in a 2-0 victory over Norwich at Turf Moor.

Managers miss out on Lundstram

Finally, John Lundstram (£4.3m) is now the top-scoring defender in FPL after his 12-point return at Everton.

The Sheffield United man continues to profit from his role in midfield, with an assist and clean sheet in the 2-0 win.

Lundstram is now the top player for value in FPL, returning 7.4 points per million, though was benched by more than half of his 24.5 per cent ownership this weekend.