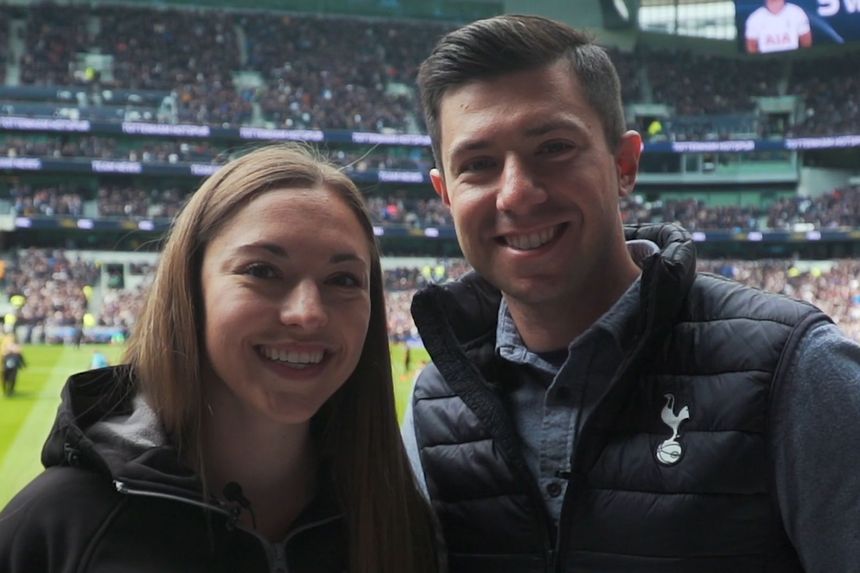 JJ and Janelle Comeau made an emotional journey to the Tottenham Hotspur Stadium last weekend.

The Spurs fans from Boston, MA, had quit their jobs to visit every Premier League stadium this season. The trip was in honor of Janelle's brother Jason, who passed away from acute lymphoblastic leukemia in 2016 and dreamt of visiting every PL ground with his sister.

They went to 24 fixtures in 78 days, visiting each of the 20 teams' stadiums.

However, timings meant that they were unable to attend Spurs' new home when it was finally ready.

But, courtesy of the Premier League and Tottenham Hotspur, the couple were able to fly back to London and went to Saturday's 4-0 home victory against Huddersfield Town.

They had found out the news when they attended PL Mornings Live in Boston and had a unique on-screen interview with NBC Sports' lead Premier League anchor Rebecca Lowe.

"Between learning that we’d be attending a match at Spurs' new stadium and having the news delivered by Rebecca - it was such an amazing feeling and experience. We honestly had no idea this was coming and couldn’t be more grateful," Janelle said.

Their trip also included a visit to the Spurs training ground and they met JJ's hero, Spurs attacker Son Heung-min.

"I think Jason is looking down on us, smiling and very proud of his sister," JJ said as they prepared to enter the stadium for the very first time.