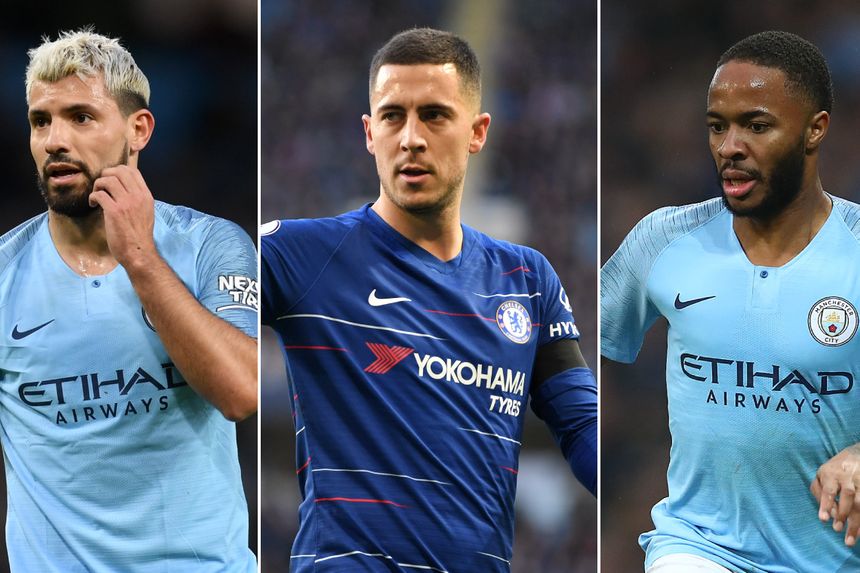 Making the correct captaincy decision could be more important than ever in Gameweek 32 of Fantasy Premier League.

That is because 10 teams will play two matches, which makes it the largest Double Gameweek of the season.

Pep Guardiola’s men face two of the bottom three sides in the Premier League, visiting Fulham before playing at home against Cardiff City.

And with an ownership of 40.8 per cent, the Argentinian striker is likely to be the No 1 pick.

Sterling, however, makes a strong case to be considered the top choice.

He has started 20 Premier League matches alongside Aguero this season and outscored him on 13 of those occasions.

By comparison, Aguero has surpassed Sterling in just five of those Gameweeks.

It is no surprise FPL managers have flocked to the pair for Gameweek 32.

Eden Hazard (£10.9m) could be their main challenger as he also boasts very promising fixtures.

Notably, Hazard produced huge hauls against both of his Gameweek 32 opponents earlier in the season.

He fired a hat-trick to collect 20 points at home to Cardiff, then returned 13 points at Brighton, thanks to a goal and an assist.

Sam Bonfield (@FPLFamily): I’m Triple-Captaining Sterling this week. Fantastic form and great fixtures mean even if he doesn’t play the full 90 in both games he should score good Fantasy points.

Ben Crabtree (@FC_CrabDogg): I'm using my TripleCaptain chip and will likely go Aguero. I'd like to maximise its use by going for someone less owned but it's hard to look past him or Sterling.

Ash (@FPLHints): The man of the moment is Sterling. We can't ignore his two hat-tricks in less than a month. Sure, rotation is always a worry but I'm confident he'll play at least 120 minutes, which is sufficient for him to run riot against two of the bottom three.

Lee Bonfield (@FPLFamily): Selecting a captain from outside Man City is a risk. I don’t think we’ll ever have two better fixtures than Fulham away and Cardiff at home, so stick the armband on Pep’s boys. It’s Aguero for me. After a rest over the international break, the Argentinian should be fit and firing.

Jay Egersdorff (@JEgersdorff): It's a balance between Aguero and Sterling, who may have their pitch time managed, versus Hazard, who'll likely get 180 minutes. Given the fixtures it feels risky to ignore the City lads. Even a single 90-minute showing could yield strong results.

Holly Shand (@FFCommunity_): It’s another tough "shield or sword" decision between Aguero and Sterling this week. I expect Aguero to get more minutes as he wasn’t involved on international duty, so he narrowly wins the armband for me.

Paul Gee (@FplPaulGee): There are the usual candidates but I really fancy Michy Batshuayi (£6.5m) against struggling Huddersfield Town and a Tottenham Hotspur side who are in a new home.

Part 2: GW32 Captains: Kane can rise to the occasion