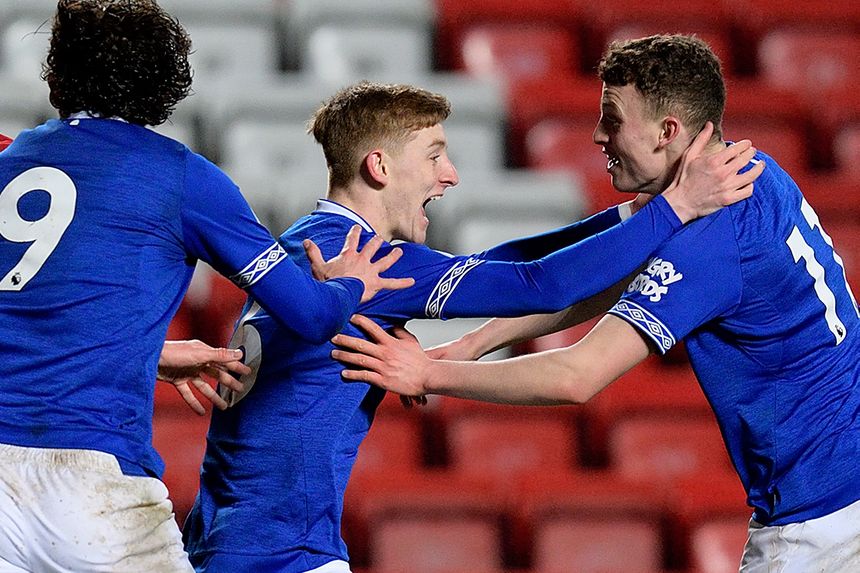 Anthony Gordon's superb free-kick three minutes from time earned Everton a 2-1 victory over Sunderland and a place in the quarter-finals of the Premier League Cup.

The Toffees took the lead after 66 minutes when Bassala Sambou scored from the penalty spot after Gordon (pictured above, centre) was fouled.

Sunderland equalised through a Williams Kokolo header with nine minutes remaining, but it was Gordon's brilliance that secured Everton a quarter-final home tie with Blackburn Rovers.

Gregor Zabret was the hero as Swansea City edged past Nottingham Forest with a 3-0 penalty shootout win to secure a Premier League Cup semi-final spot.

After 120 minutes without a goal, Adam King, Adnan Maric and Matthew Blake kept their cool to convert their spot-kicks for the Swans. Forest's Joe Coveney hit the crossbar from 12 yards, while Swansea goalkeeper Zabret saved the efforts of Alex Mighten and Brennan Johnson.

It was the second time in the match that Zabret had denied Johnson, with the Slovenian goalkeeper saving his 15th-minute penalty in normal time.

Leeds United booked their place in the last four with a 3-1 win at Burnley.

The visitors took the lead after a quarter of an hour courtesy of an own goal by Christian N’Guessan.

Dan Agyei levelled for Burnley just before half-time, but a brace of second-half headers from Ryan Edmondson and Hugo Diaz sent Leeds through.