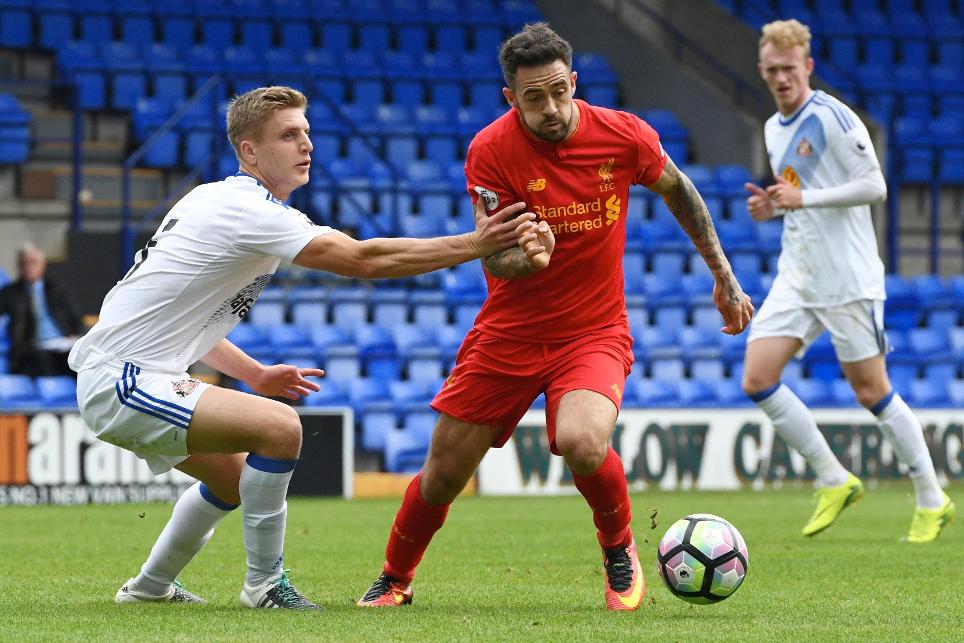 'It's a relief to get off the mark' External Link

The striker, in fine goalscoring form for the Under-23s since returning from injury, scored the opener just after half-time.

He was then denied by a superb save from Max Strycek before heading in Pedro Chirivella's first-time cross on the hour mark.

Trent Alexander-Arnold added a third, twice beating his man before finishing with a powerful strike.

The Reds are one point behind Premier League 2 Division 1 leaders Southampton, who claimed top spot with a 1-0 success against Tottenham Hotspur on Friday.

Jack Stephens netted the only goal, heading Callum Slattery's free-kick in off the crossbar on 38 minutes.

Harley Willard was denied by Spurs goalkeeper Tom Glover on the stroke of half-time, before Southampton shot-stopper Harry Lewis saved efforts from Kyle Walker-Peters and Reo Griffiths as the visitors pressed for a leveller.

Both teams finished with 10 men as Willard and Spurs' George Marsh received second bookings after an altercation.

One day before Arsenal's first team beat Chelsea 3-0, the Gunners edged the Blues 2-1 in PL2.

Chelsea's Charlie Wakefield levelled on the hour after Reiss Nelson's opener for the Gunners at Stamford Bridge, but Stephy Mavididi won the contest on 82 minutes with a fine solo goal.

That was a second win of the season for promoted Division 1 side Arsenal, who are two points and three places behind Chelsea, who lie seventh.

Also in Division 1, Manchester City drew 1-1 with Leicester City at the Etihad Stadium. Cameron Humphreys netted a late equaliser for the hosts after Yohan Benalouane had headed the Foxes in front.