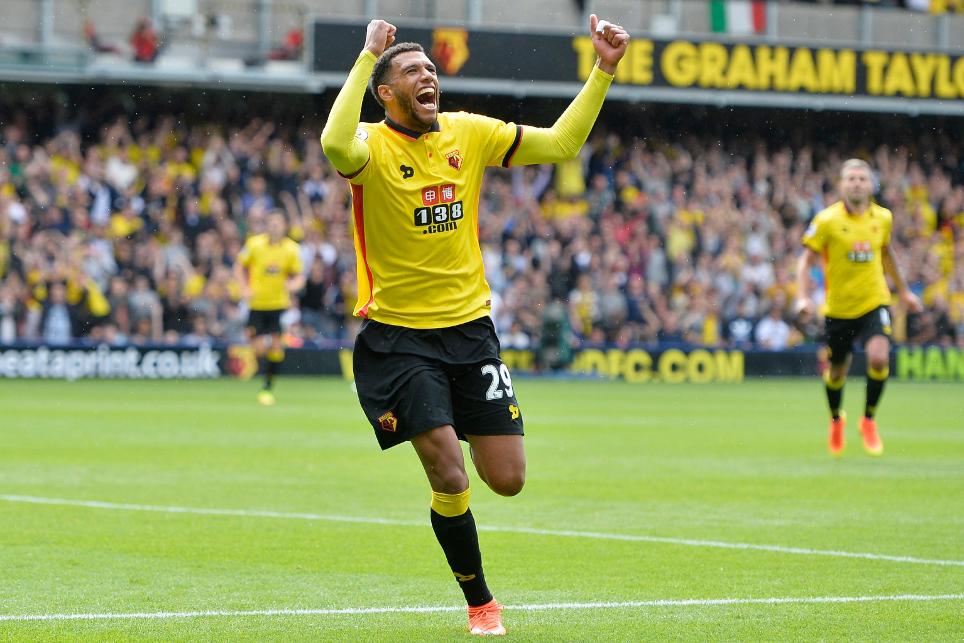 “The Next Two Games Are The Most Dangerous” External Link

Hendrick Is Getting Along Just Fine! External Link

Monday night's match between Burnley and Watford will be their 35th meeting between the two clubs but their first encounter in the Premier League.

Three at the back often means five but that has not been the case with Walter Mazzarri's Watford.

Using a new 3-5-2 formation, the Hornets are playing with a positive mindset and their adventurous structure has eased the burden on strikers Troy Deeney and Odion Ighalo.

Last term their prolific front pairing was responsible for 70% of Watford's Premier League goals, as well as the bulk of their assists. It was an over-reliance that made them predictable.

Under Mazzarri, it is different.

Demanding braver runs into the box from midfielders, primarily Etienne Capoue and Roberto Pereyra, while also encouraging his team to use the full width of the pitch with wing-backs Daryl Janmaat and Jose Holebas, the head coach has developed a far broader spread of contributors.

In only five matches, eight different Watford players have scored a goal or created one.

Going into this weekend's matches, only leaders Manchester City have scored more goals from open play than Watford's nine. In context, the Hornets were ranked fourth lowest when it came to open-play goals in 2015/16.

How Watford avoid having five at the back

Opposition managers will continue trying to pin their wing-backs back, forcing the Hornets to play with five in defence, but Mazzarri appears determined not to let this happen often.

Holebas and Janmaat play like orthodox wingers, pushing on at will and pressing the opponents' full-backs in advanced areas. Watford's shape is often akin to a 3-1-4-2 instead.

With the back three behind them all shifting across (see image above), and Valon Behrami happy to drop off, it has not felt like they are short on numbers at the back.

From a well-organised, balanced platform, six of Watford's starting XI are spurred on by Mazzarri to join in with attacks.

However, Watford will now have to make changes as Janmaat has been ruled out with what Mazzarri has said 'could be a shoulder fracture'.

If there is one area Watford have struggled, it is preventing the delivery of crosses. It is a vulnerability they share with Burnley.

For Mazzarri's men, the figures (see table below) are no surprise. With advanced wing-backs, leaving space in the wide channels is unavoidable. So when early passes are played down the sides, they are a little vulnerable.

Chelsea and Arsenal both enjoyed room lots of room between Watford's centre-backs and their nearest wide man at Vicarage Road, and Zlatan Ibrahimovic's quick one-two and cross for Marcus Rashford's goal last time out also exploited this flaw too.

Asking his centre-backs to cover the wide areas more often than in the past has presented problems, but as the season progresses, I expect their positional understanding to improve.

Burnley are pretty comfortable dealing with crosses hoisted into the area. They have made a league-high 95 headed clearances this season and, because manager Sean Dyche likes his team to defend deep within a compact shape, it is a strength they rely on.

With Deeney lurking inside the box on Monday, Burnley may want to focus harder on stopping them at source.

It is not a question of workrate - Burnley regularly top the running statistics - but it could be argued their wingers have not "doubled up" with their full-backs efficiently this season.

At times it has felt like Matthew Lowton and Stephen Ward have been targeted as weak links.

In their matches with Burnley, Swansea City, Chelsea, Hull City and Leicester City all switched play to the flanks at will, attempting to isolate them; enjoying success with the tactic, too.

It is vital the hosts do not allow Watford's flying wing-backs too much freedom at Turf Moor.

Where is Defour best placed?

When Dyche invested a club-record fee on Steven Defour, he knew he was bringing in a player who had the pedigree to handle Premier League football. The 28-year-old Belgian midfielder has made an instant impression.

Running half the length of the pitch to set up Andre Gray for a goal against Liverpool on his home debut, he produced a magnificent individual effort from long range against Hull.

Capable of driving forward at speed, breaking up play or adding calmness in possession (his pass accuracy of 87% far exceeds the team's average of 72.6%), Defour is already the main man for the Clarets.

Where is his best position? This is something the Burnley manager needs to weigh up.

If he deploys only one striker, Defour's qualities could be used in a free role behind the forward, as it was last time out at Leicester, but, in my view, he is best in a more orthodox central midfield berth with the play ahead of him.

Boasting home advantage on Monday evening it may make sense to bring target man Sam Vokes back into the side, meaning either Dean Marney or club record signing Jeff Hendrick miss out in midfield.

The pattern of Capoue's goals

Urged to make up the numbers inside the penalty area with far greater regularity than he was under Quique Sanchez Flores, Capoue is Watford's top scorer.

On the left of a midfield three, he is fast making a name for himself as a player who ghosts into the penalty area undetected to score goals.

As shown in the image above, all four of his efforts have stemmed from right-wing crosses he ran on to from deep.

If Burnley's midfielders choose to ignore his presence in these situations, the Frenchman is in the form to make them pay.

To land their second victory of the campaign, Burnley must rediscover the aggression they displayed when shocking Liverpool 2-0 at Turf Moor. That day they scored both goals from turnovers but it is a habit they have found hard to replicate.

Making the fewest tackles per match (13.7) and winning the joint-fewest duels in the division (227), the promoted side have been more passive than many expected.

Sitting back and keeping their shape for long periods, the Clarets are also struggling to create clear-cut chances. By adopting a more proactive approach, winning the ball back in better areas should come easier.

On fast transitions, the pace of Gray down the sides of Watford's central defenders could pose the visitors serious problems in this match.

Mazzarri will simply ask for more of the same. His Hornets side are playing with great confidence and efficiency. Despite making fewer successful passes than Burnley in 2016/17, Watford are outscoring them by 10 to three.

To climb the table, Dyche's men must learn to add that kind of penetration to their own game.