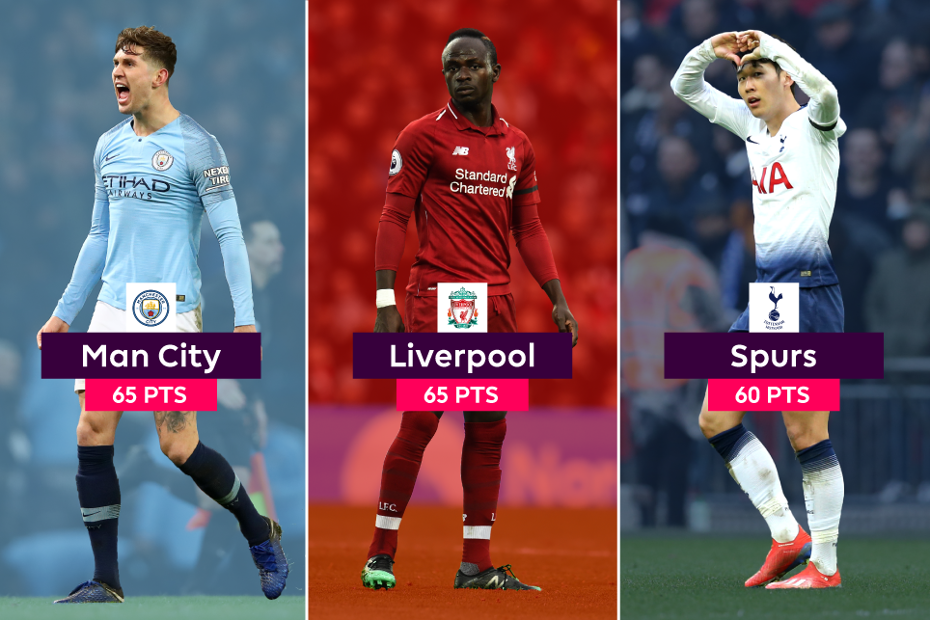 As City, Liverpool and Spurs battle to be champions, we look at their next matches and history of close-fought title races

If Manchester City are to become the first Premier League team to successfully defend their title in 10 seasons, the pressure is on them to remain at the top by the international break in March.

City are going toe-to-toe with Liverpool, with only goal difference keeping the champions in first place at the moment.

Only once before was the title decided by such a fine margin, when Sergio Aguero was the hero.

His stoppage-time goal claimed victory against Queens Park Rangers to deny Manchester United in 2011/12, despite the two rivals having identical points.

This season, there is a third team in the mix as Tottenham Hotspur wait in the wings should both slip up.

With five Matchweeks until the next international break in mid-March, some decisive blows could be struck.

After being 10 points off the top on 29 December, in third position, the champions have come storming back, winning seven of their last eight matches to go top.

Pep Guardiola's side have played a match more than Liverpool and Spurs but are set to be one behind their rivals by the international break.

After missing the next round of PL fixtures because of the Carabao Cup final on 24 February, their 16 March fixture at Man Utd is now awaiting a new date because of FA Cup progress.

So, the onus is on City to get maximum points against West Ham United, AFC Bournemouth and Watford to ensure that they are not playing catch-up too much.

Having suffered a dip in form, dropping points in three of their last six PL matches, Jurgen Klopp's side face the tough trip to an in-form Man Utd at Old Trafford on Sunday.

Liverpool, who defeated AFC Bournemouth 3-0 in their last PL outing, can move clear at the top once more while Man City are busy against Chelsea at Wembley Stadium.

To do so, however, they will have to inflict Man Utd's first PL defeat under caretaker manager Ole Gunnar Solskjaer.

Liverpool also have a derby match on the horizon, with a short trip across Stanley Park to Everton on Sunday, 3 March, to face a home side who lost to a stoppage-time winner scored by Divock Origi in the reverse fixture.

This makes success in their matches against Watford, Burnley and Fulham vital for Liverpool to sustain their charge to a first Premier League title.

Despite injuries to key players, Spurs remain firmly in the title hunt.

Having been nine points off the top in mid-January, they have closed the gap to five with four successive victories. But Mauricio Pochettino's men face a tough schedule.

They next visit a Burnley side who are unbeaten in their last seven PL matches before back-to-back London derbies against Chelsea and Arsenal.

Then follows a trip to a Southampton side battling to avoid the drop.

This will be their last match before the international break so Spurs will be a match behind Liverpool and hoping not to be too far off in points terms.

They could be boosted against Burnley by the return of Harry Kane from an ankle injury while Dele Alli is thought to be not far behind in the recovery process.

That said, Son Heung-min has ensured that Spurs have not missed the pair too much, scoring in the last three top-flight fixtures.

By 17 March, we may be no clearer to predicting who will lift the Premier League Trophy come the season's end.