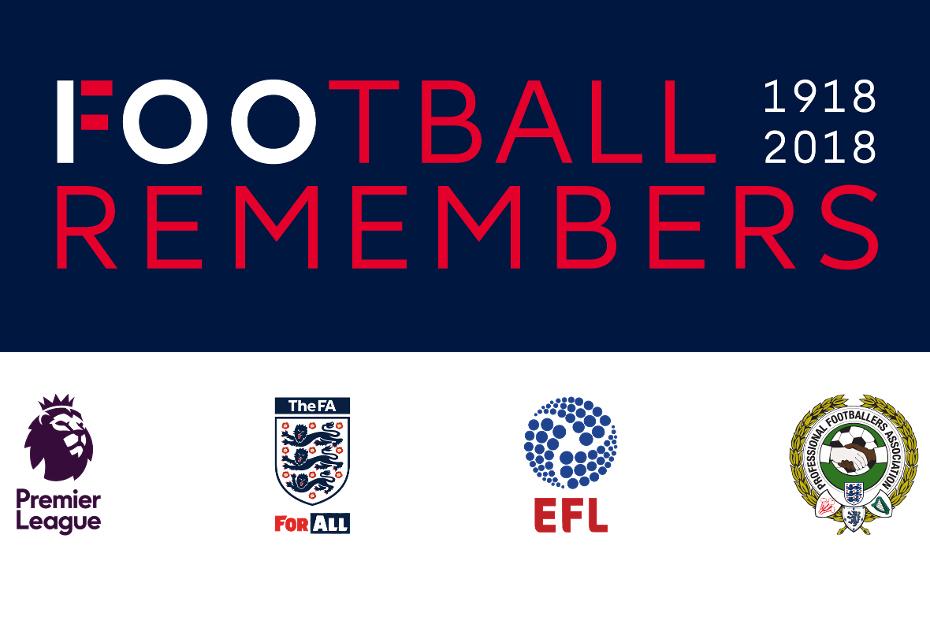 The Premier League, The FA, EFL and the PFA are joining forces under the banner of "Football Remembers" to mark the Armistice Centenary and Remembrance Weekend.

On 11 November 1918, the Armistice was signed, signalling the end of World War One.

One century on, England’s four football organisations will be part of the nationwide commemorations, with support from Premier League clubs, EFL clubs and the English national teams paying tribute through a variety of activities.

A range of Football Remembers activity will take place to mark the efforts of servicemen and women, past and present, in the period leading up to Remembrance Sunday which coincides with the Armistice Centenary.

Bespoke commemorative coins from the Royal British Legion will be used for the coin toss at every Premier League, EFL and FA Cup match over both weekends to pay tribute to all those involved in the First World War.

In the build-up to Remembrance weekend, Football Remembers will also be backing a number of related projects.

The Premier League has been proud to support The Royal British Legion for many years, making a significant contribution to raise much-needed funds to help people in the Armed Forces community.

During Premier League matches played in the period leading up to Remembrance Sunday players will wear shirts embroidered with a poppy, and then will sign and donate them to the Legion to be auctioned.

For Club and Country

"For Club and Country" will involve Premier League and EFL clubs across the country planting trees at their stadiums or training grounds, serving as living legacies to the hundreds of footballers who served and fell in the First World War.

Run in partnership with the Woodland Trust and the National Football Museum, "For Club and Country" saw The FA and England plant trees at St George’s Park in memory of the 14 internationals who served in World War One.

Launched in March 2018 and continuing through to November, the "Tull 100" project is using the story of Walter Tull – one of the first black professional footballers and a pioneering Army Officer - to fund and inspire a series of inclusion projects at football clubs and community organisations around the country.

In a more artistic tribute, the four football bodies are sponsoring "The Greater Game" at Waterloo East Theatre, London. This play tells the story of Clapton Orient and the men who swapped the football fields of London for the battle fields of the Somme in 1916.

In the Games of Remembrance the football teams of the British and German armies will compete in memory of those who fought so bravely decades ago.

Two fixtures will take place in Nottingham on Thursday 8 November, with Notts County hosting the women’s fixture at midday, and Nottingham Forest hosting the men’s match at 19:00.

Other events and initiatives taking place across the game over the coming weeks will form part of the Football Remembers initiative and be promoted by The FA, Premier League, EFL and PFA.