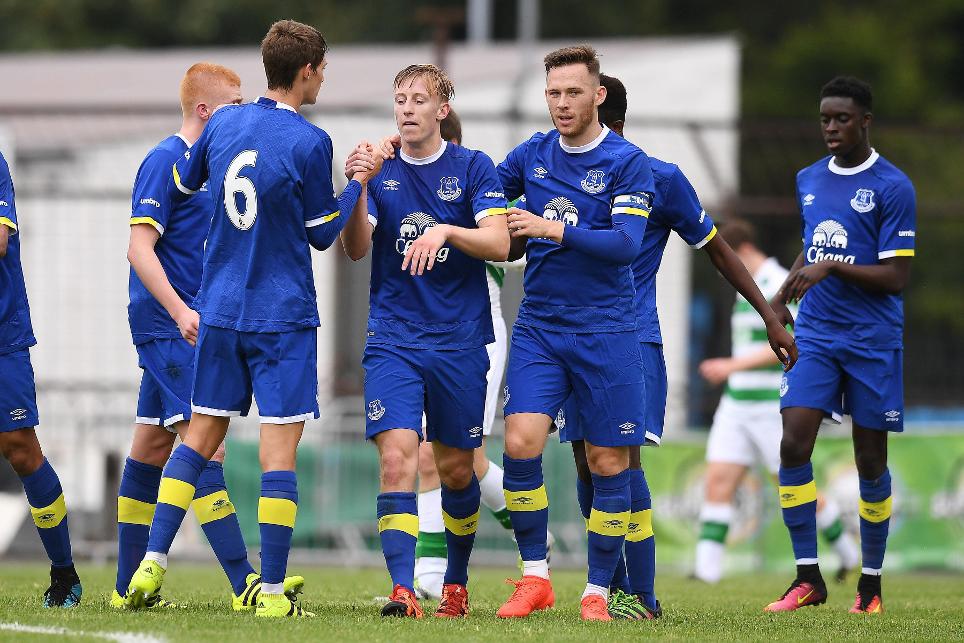 Harry Charsley inspired the Toffees' 4-1 victory over Leicester, which puts them top of Division 1

Everton maintained their perfect start to the Premier League 2 season with a 4-1 victory over Leicester City, meaning they are the only side with a 100% record in Division 1.

Harry Charsley put the Toffees ahead with his third goal in two matches, before he set up Courtney Duffus to head in the second on the hour mark.

Charsley also set up substitute Antony Evans for the third before Calum Dyson stretched the lead. Danny Rowe hit a late consolation for Leicester, who are still looking for their first point of the season.

Southampton and Manchester City both failed to maintain their perfect starts to the season.

Saints lost 3-0 at last season’s runners-up Sunderland, with Josh Maja striking twice in the first half and George Honeyman completing the scoring after the break to put the Black Cats second in the table.

Man City were edged out 3-2 by Reading at the Madejski Stadium. The Royals raced into a 3-0 half-time lead through Sandro Wieser, Tarique Fosu and Thomas McIntyre. Paolo Fernandes replied early in the second half and Isaac Buckley-Ricketts hit a late second.

Promoted duo Arsenal and Derby County are still to pick up a point after suffering their third successive defeats.

The Gunners faced a Liverpool team who had also lost their opening two matches, but it was the Reds who got their season up and running with a 3-1 win at Emirates Stadium.

Lucas Leiva made his first appearance since picking up a pre-season injury, playing all of the first half, and he was involved in the move that led to Ben Woodburn's opener. Chuba Akpom replied but Toni Gomes made the match safe.

Derby went down 2-1 to Tottenham Hotspur, who took the lead through Shayon Harrison’s fifth minute penalty. Charles Vernam equalised with his third goal in three matches but Kyle Walker-Peters secured the Londoners’ second successive away win.

It was honours even between Manchester United and Chelsea, who drew 1-1 at Leigh Sports Village. Kyle Scott put the Blues ahead in first half stoppage-time but a late own goal from Joseph Colley meant the visitors had to settle for their second draw of the season.

Swansea City ended West Ham United’s 100% start to the season and kept their own run going with a 2-0 victory at the Liberty Stadium.

The Swans, with Wales left-back Neil Taylor again in their line-up, took a 57th minute lead through Owain Jones. Marvin Emnes’ late penalty was saved by Nathan Trott but there was still time for Botti Bia Bi to seal the victory.

Wolves are third in the table after a 3-1 victory over local rivals West Bromwich Albion at Molineux.

Jack Fitzwater gave the Baggies the lead on the hour mark but a Connor Ronan penalty and two goals from Bright Enobakhare turned the match around.

Defender Bernardo Espinosa played the full 90 minutes as Middlesbrough won 2-1 at Norwich City. Rob Tinkler and Joao Morelli struck either side of the interval, with Carlton Morris hitting the Canaries’ consolation.

Libor Kozak hit a hat-trick to help Aston Villa to their first win of the season as they comprehensively beat Newcastle United 4-0 at Villa Park.

Brighton & Hove Albion and Blackburn Rovers each earned their first victories of the campaign, with respective 1-0 wins over Fulham and Stoke City.