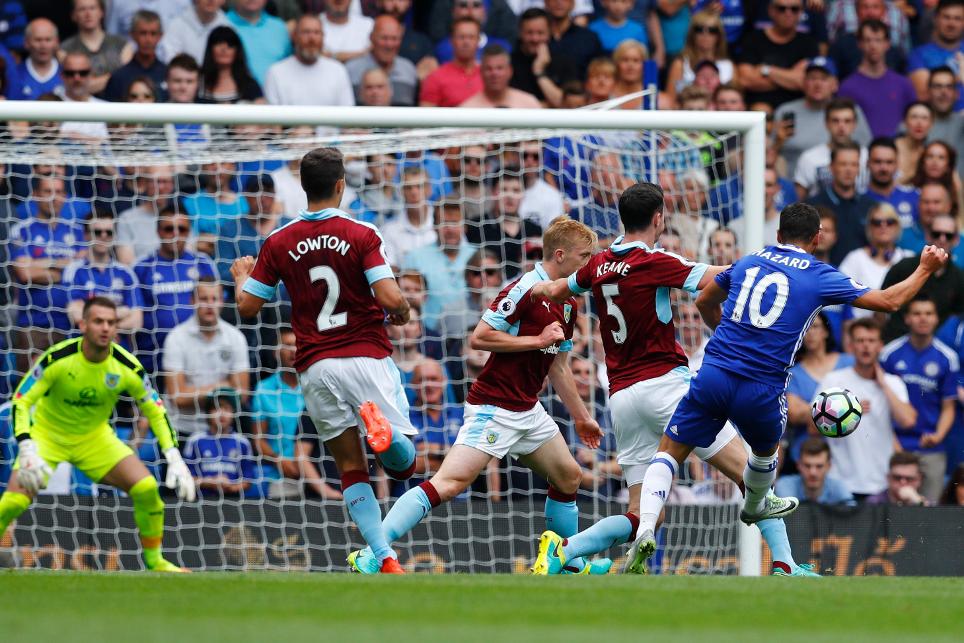 Chelsea's wingers dominated the points after the victory at Stamford Bridge

Conte: Front to back External Link

Chelsea widemen Eden Hazard (£10.2million) and Willian (£7.4m) were tied at the top of the Bonus Point System (BPS) having both scored goals in the win over Burnley at Stamford Bridge.

Hazard produced attacking points for the third consecutive Gameweek via a crisp low finish for the Chelsea opener. The goal was accompanied by two key passes and a pair of completed dribbles as the Belgian totaled 33 in the BPS.

Willian matched that BPS tally via his own low drive for Chelsea’s second, in addition to five key passes and two open-play crosses.

Cesar Azpilicueta (£6.0m) earned a single bonus point from left-back. He supplemented a clean sheet by making six recoveries and completing 88% of his 73 passes.

Azpilicueta is the only Chelsea defender to earn a bonus so far, collecting one point in two of the opening three Gameweeks.

No player could make Hazard’s ICT Index tally of 16.6. The Chelsea player recorded 49 for Influence via his first-half goal and was a narrow runner-up to Diego Costa (£9.6m) for ICT Threat by a score of 85 to 89 in Saturday’s encounter.

Hazard recorded 12 touches in the Burnley penalty box, helping him produce no less than seven attempts on goal, three of which hit their target.

Costa matched Hazard for penalty-area touches, while firing in five efforts on goal, all from within the Burnley box.

Willian completed the top three in the Index. The Brazilian completed 25 passes in the attacking third on his way to creating five chances for team-mates and supplying ten crossed balls.

Hazard’s early-season form under Antonio Conte has made him the top FPL transfer target this week.

Over 92,000 have acquired the Belgian, who has risen to top of the player standings on 25 points.

While Hazard sits in more than 27% of squads, Costa has been selected by just 11.2%. The forward’s assist means he has also produced points in each of the first three Gameweeks as he steps up his consistency with Conte at the helm.

Willian looks to have sealed the role on the right after returning with a goal, although both Victor Moses (£5.5m) and Pedro (£7.4m) staked a claim by delivering a goal and assist respectively as second-half substitutes.

After earning just nine clean sheets last season, Conte’s arrival has improved the Blues’ backline. Chelsea have conceded just 11 shots inside the box, fewer than any other side.

Tom Heaton (£4.5m) continues to offer a steady stream of returns due to a propensity for earning save points in the Burnley goal.

Despite losing 3-0, the Clarets’ goalkeeper produced three points at Stamford Bridge after defying the hosts with six stops. Heaton has made 18 saves this season, four more than any other Premier League goalkeeper.