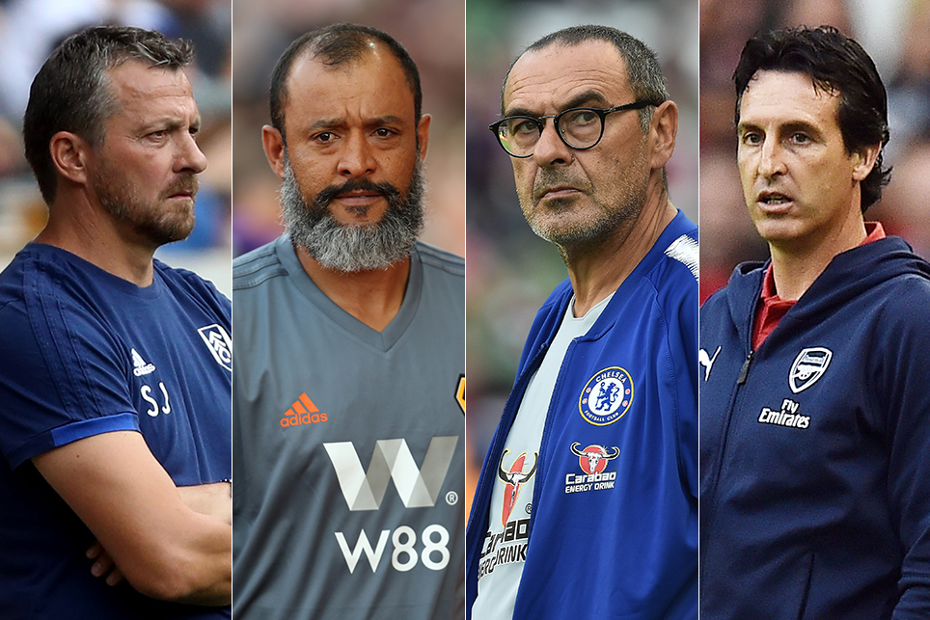 Since its inception in 1992, a total of 231 managers or head coaches have taken charge of a club in the Premier League.

That number will increase to 235 on the opening weekend with four new tacticians set to make their maiden appearances in the competition.

Slavisa Jokanovic (pictured, above left) and Nuno Espirito Santo (pictured, above centre left) will experience the PL for the first time as a reward for guiding Wolverhampton Wanderers and Fulham to promotion from the Championship respectively.

Jokanovic, 49, will be the first Serbian to manage in England's top tier, while Nuno, 44, will be the 10th Portuguese national, but first native of the African island of Sao Tome and Principe to grace the competition.

Maurizio Sarri, the 59-year-old Italian (pictured, above centre right), has replaced compatriot Antonio Conte at Chelsea, and Arsenal's Unai Emery (pictured, above right) takes over from the longest-serving manager in the history of the competition, Arsene Wenger.

Emery will need to take charge of 829 matches in order to surpass the Frenchman's appearance total, a feat that would require the Spaniard to still be in charge in the 2040/41 season, by which time he will be 68 - Wenger's current age.

There are three more familiar faces returning to the Premier League in charge of new clubs.

Having already won the 2013/14 Premier League title with Manchester City, Manuel Pellegrini will be in the dugout for West Ham United in 2018/19.

Marco Silva has taken the helm at Everton following spells at Hull City and Watford, and Neil Warnock is back in the top flight with Cardiff City.

The Yorkshireman has managed Sheffield United, Queens Park Rangers and Crystal Palace in the Premier League and is tasked with overseeing the Bluebirds' second PL season, having guided them to promotion in May.