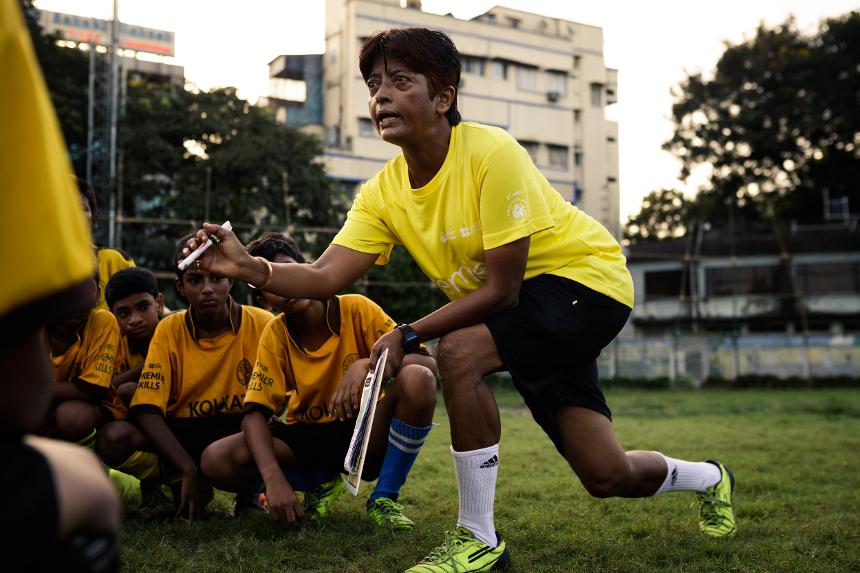 Premier Skills is our flagship international community programme that trains coaches and referees around the world. Kuntala is just one of thousands who have been trained to inspire others in the last 10 years.

Premier Skills is our flagship international community programme that trains coaches and referees around the world in partnership with the British Council.

Kuntala is a Premier Skills coach in India who says she is ‘married to football’. Growing up in Kolkata and wanting to progress as a professional footballer, she had to overcome significant challenges around social acceptance and lack of quality coaching and facilities.

"I have always loved football. We didn't have any proper playing facilities, coaching or any girls’ teams when I was growing up - so I played with the local boys’ team. We didn't have many female role models but I was lucky to have a family who backed me."

Through her hard work and determination, Kuntala went on to represent West Bengal and then to captain India in the World Cup.

"When I was introduced to Premier Skills I was very happy, as it was my chance to do something for my community through football."

She is particularly passionate about getting more women and girls involved in football and Jhuma is just one of the many girls she has coached.

Since being coached by Kuntala, Jhuma has really become a skilled footballer and broadening her horizons.

"Jhuma has really grown in confidence through Premier Skills. She has made fantastic progress in her football, even travelling to Belgium to take part in the Premier League Truce Tournament."

Her parents are very excited for their daughter to have the chance to play football and grasp new opportunities.

Kuntala has been impressed by the quality and benefits she feels Premier Skills has offered her.

"It's a privilege to work with Premier Skills. To do something for the community is a very satisfying experience.

"The things we learn here are not just important for community coaching but some aspects can be used in our general football coaching as well.

"We get to learn a lot of different things from the Premier League Club coaches, which helps us to be better community coaches and in turn helps the kids we work with."

Premier Skills marked its tenth anniversary in season 2016/17 and has trained 17,715 coaches and referees in 29 different countries since it began.

Those people have in turn reached and inspired over 1.5 million young people.

The programme has had particularly impressive success in encouraging and growing female participation in sport, in areas of the world where it is often less accepted. Women and girls now account for 34% of those involved in Premier Skills.

Sir Ciarán Devane, Chief Executive of the British Council commented, "The Premier Skills programme is ten years old and we could not be more proud of what it has achieved.

"The partnership has continued to grow, now operating in countries across Asia, Africa and the Americas, to enormous success.