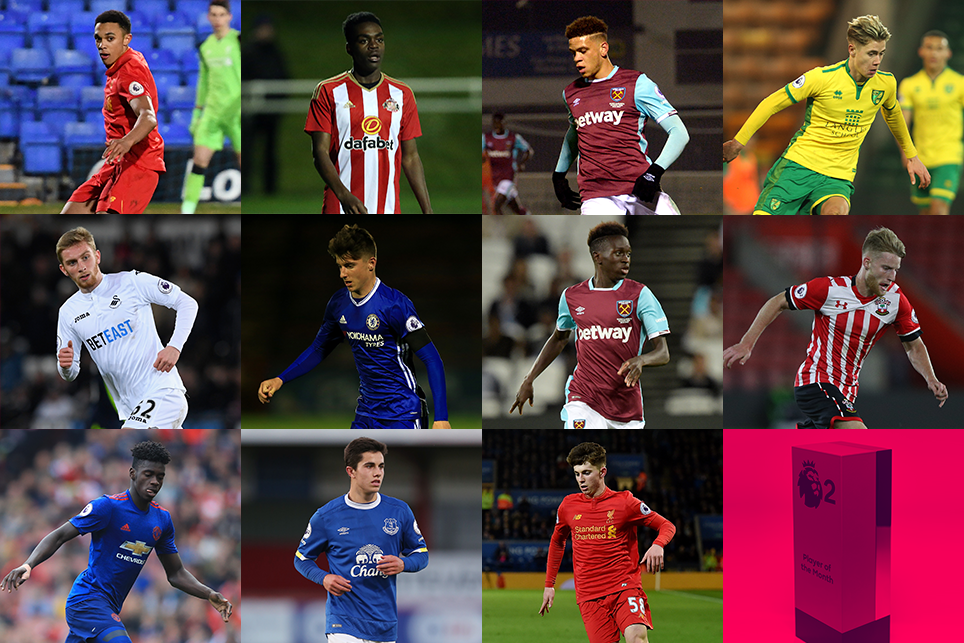 Walsh Nominated For Player Of The Season External Link

Eleven players have been nominated for the Premier League 2 Player of the Season award.

Chelsea, Everton, Liverpool, Manchester United, Norwich City, Southampton, Sunderland, Swansea City and West Ham United are all represented on the shortlist, with Domingos Quina and Ben Woodburn the two youngest contenders for the 2016/17 accolade at 17 years of age.

The list was selected by a panel of the Premier League Football Development Department after PL2 managers had nominated the best individual performance from each of their opponents over the course of the season.

Alexander-Arnold has shot to prominence this season, the 18-year-old right-back making 25 appearances and scoring four goals. He signed a long-term contract in November and made his senior Premier League debut a month later against Middlesbrough, since winning Liverpool's Young Player of the Season award.

Earmarked as a star of the future by Sunderland PL2 coach Elliot Dickman, 18-year-old forward Asoro helped the Black Cats to the final of the Premier League International Cup, earning senior appearances in the FA Cup and EFL Cup in a breakthrough campaign.

One of two West Ham contenders, midfielder Browne, 19, scored scored five goals in 24 appearances across all competitions including a loan spell at Wigan Athletic.

Cantwell, a 19-year-old attacking midfielder for Norwich City, has played 26 matches this season, netting six goals and helping the Canaries reach the semi-finals of the Premier League Cup and the Premier League International Cup.

A double winner in 2016/17, 20-year-old striker McBurnie scored 23 goals in all competitions as Swansea City won PL2 Division 2 trophy and the Premier League Cup. The January PL2 Player of the Month scored twice on his senior Swansea City debut in the EFL Cup second round and has since been rewarded with five Premier League outings.

🏆 Congratulations to @oli_mcburnie, who has been named our Under-23s Player of the Season! 🏆#SwansAwards pic.twitter.com/bNkKguWHBx

The 18-year-old midfielder has made 27 appearances in 2016/17, missing only one PL2 Division 1 fixture as Chelsea finished in fifth place. He scored five goals in total across the campaign.

The youngest of the nominees, 17-year-old midfielder Quina scored two goals in 20 appearances, helping West Ham United to promotion via the PL2 Division 2 play-off final. He has been named in Slaven Bilic's matchday Premier League squad on 11 occasions.

Twenty-year-old Sims won the November PL2 Player of the Month award and has earned seven senior Premier League appearances this season, scoring six goals in total for a Southampton side who were relegated from PL2 Division 1.

Congratulations to @simsjosh12, who has been shortlisted for the #PL2 Player of the Season award! 👏 #saintsfc https://t.co/Cm9GmSknpg

Tuanzebe's performances in his 20 PL2 outings have earned the 19-year-old three senior Premier League appearances for Jose Mourinho's side, making his debut at Arsenal on 7 May.

The winner of February's PL2 Player of the Month award, Walsh helped Everton clinch the Division 1 title as David Unsworth's side lifted the trophy in front of 17,525 fans at Goodison Park earlier this month. The 19-year-old midfielder scored six goals in 26 appearances in all competitions.

Woodburn won Liverpool's Academy Player of the Season award after scoring 12 goals in 27 appearances. In a memorable 2016/17 he became the club's third-youngest senior debutant and youngest goalscorer, breaking Michael Owen's record in the EFL Cup versus Leeds United aged 17 years and 45 days.

Congratulations to @BenWoodburn & @trentaa98, who have been nominated for the #PL2 Player of the Season award! 👏