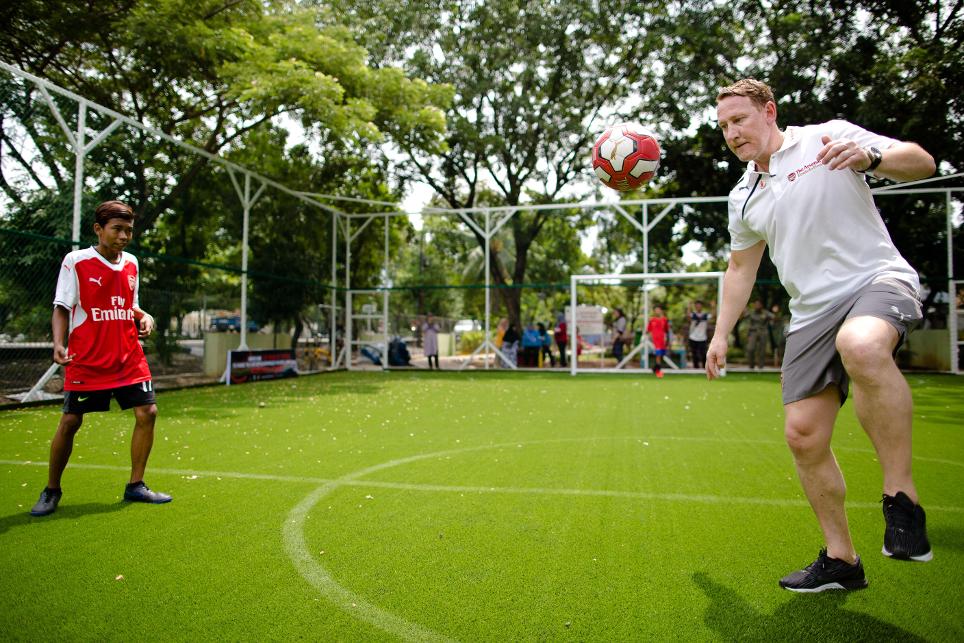 Dhani, living homeless on the streets of Jakarta, stresses value of new pitches built by The Arsenal Foundation and Save the Children

For keen footballer Dhani, life in the slums of Jakarta is hard. He is homeless and sleeps on a bench with his father, who went blind a few years ago, as well as his younger brother and sister.

"Every day I sift through the rubbish tip," he says. "I'd like to go to school, but what else can I do? My family is poor."

He is not the only young person facing daily challenges in Indonesia's capital but the Arsenal Foundation and Save the Children have teamed up to help, building three new football pitches and running training sessions for boys and girls, funded by last season's Arsenal charity ball.

The children in Jakarta have been given a safe place to play, to build friendships and confidence and to learn about their rights.

"It feels like a dream come true," says Dhani. "Now I am part of the team. I love playing football. I want to be a good player, the best I can be, to make my family and friends happy."

Arsenal legend Ray Parlour travelled to Indonesia to open one of the pitch and to see how the Arsenal Foundation is helping young people like Dhani.

"He faces so many daily struggles but football is giving him back a bit of his childhood and putting a smile on his face," Parlour told arsenal.com. "I'm proud The Arsenal Foundation and Save the Children are getting involved here. We're using the Arsenal name to give children a better future."

Thanks to funds raised from last year's Arsenal Legends match, The Arsenal Foundation and Save the Children are also working together to build pitches and run similar programmes in Somalia and Jordan.